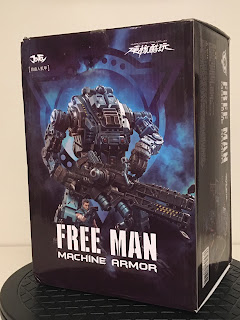 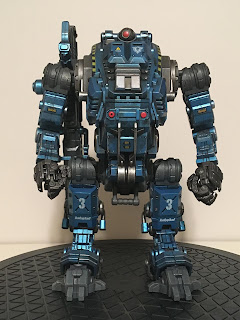 JoyToy's Free Man Machine Armor stands roughly 9" tall, and represents a mech done in 1/18 scale. It includes a 4", fully articulated pilot and a massive double-barrel weapon, along with a removable pistol (which can be stored in the rifle grip). The pilot has his own pistol, as well, which can be stored in the holster on his right thigh. The mech is available in 2 colors (metallic blue and sand) and is priced at approximately $120.

JoyToy is a Hong Kong based company specializing in 1/24(ish) and 1/18 scale military personnel and mecha. I have several of their products and they generally look amazing, but have some significant drawbacks that I've learned to expect upon purchase. Firstly, the plastic is very lightweight and brittle. I handle these VERY carefully and pose them minimally. Second, they will have loose joints that will need a little care. I've found that putting a little floor wax on the pegs in inside the joints generally takes care of the problem, and I have had no falling issues. Third, there are no instructions other than a small leaflet with a few pictures. I discovered (mostly by accident), for example, that the Free Man is shipped with its biceps and forearms rotated around backwards. I went to bend the elbow and found it quite restricted, before realizing that was due to the incorrect arm part positioning. Fourth, the joints are not always easy to work with. Some feature ratchets and some don't, but I do find it challenging to get them to pose well. As a result, mine will all stay in a standard vanilla pose on the shelf. Otherwise, I love these mechs. They feature really amazing sculpts and the paintwork is great. They are currently posed alongside my Play Arts Kai Titanfall Atlas and they look great! Incidentally, I did conduct a lead test on the paint, just to make sure they weren't painted with lead-based paint, and it turned up negative. 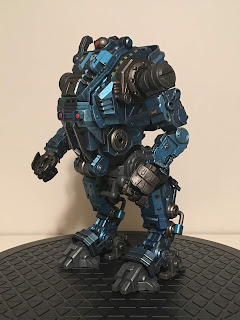 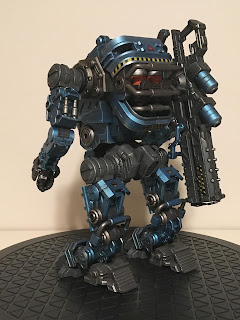 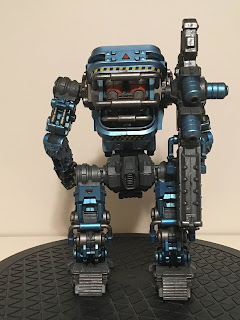 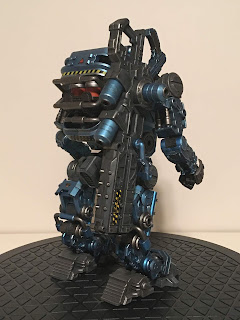 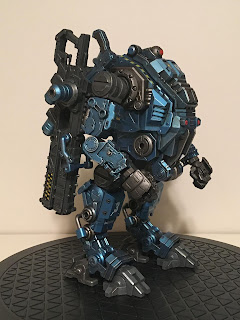 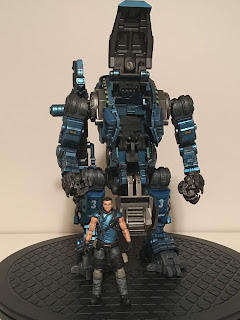 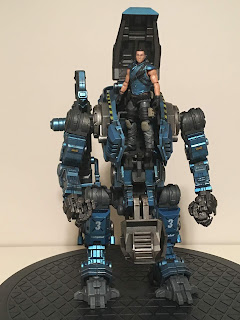 Posted by toyjedi at 9:05 AM No comments: