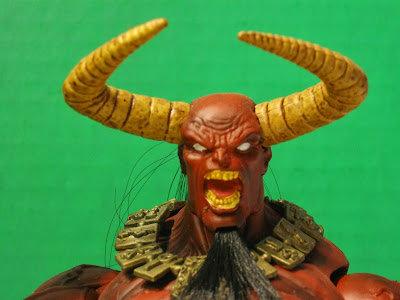 Lucifer was part of the first wave of Chaos! Comics action figures created through a collaboration between Art Asylum and Eternal Toys back in 2001. The wave included Purgatori, Jade and Chastity, as well, with a second wave released after, which included Battle Armor Lady Death, Oblivia, Vandala (I think) and someone else I can't remember. The figures were truly outstanding for their time, in terms of sculpt and the sheer attempt they made to be spectacular. Even more than a decade later, Lucifer intimidates nearly every other figure on the shelf beside him... 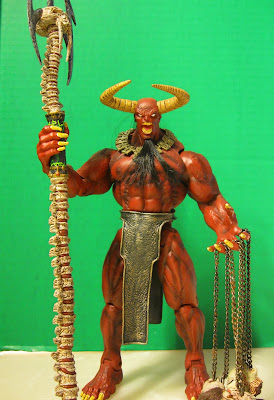 Lucifer is sculpted beautifully in a deep maroon plastic full of dark shading. The musculature features deep cuts for definition and plenty of veins popping here and there (this was the common "detail" to muscular males in the early 2000s, but the veins were often oddly placed and followed no anatomical rhyme or reason), in mostly appropriate locations. He stands a towering 9 & 1/4" tall to the top of his head, with a bit more added on for his curving horns. The accessories are just as amazing: the staff features a grotesque fanged skull at the top, individual vertebrae and a small curling tail at the bottom. There are tons of details to make the parts look like bone, and the grip has designs sculpted and painted into it. The spikes at the top are appropriately metallic, and the entire thing is made of a bendy rubber, so that the staff can be shaped as you wish. Lucifer's other hand dangles 3 decapitated, mangled and bloody heads with real chains protruding from their dripping eye sockets. Each of the three features rooted hair, as well. 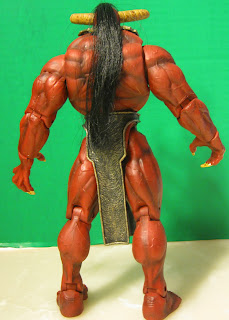 As if all of that wasn't enough, Lucifer boasts a rooted hair beard and ponytail. The articulation includes a cut neck and wrists, ball jointed shoulders, single pin elbows, knees and ankles, a cut waist, and pin/post hips that allow for movement forwards, and to the sides: 16 points in all. The joints are tight (and the plastic is good quality), so he holds poses pretty well. However, despite all those points, I find him a bit restricted: there's nothing to allow his thighs or ankles to rotate outwards, so even though the hips can swing out to the sides, this would causes his feet to be angled to the floor. Similarly, without cut biceps, there's only so much that can be done with the arms. That said, he looks terrific just standing up and ahead with his fierce sculpted scream to keep you up at night. 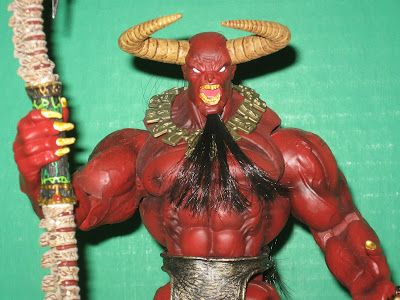 Lucifer is a neat figure- probably my favorite of the line. He was impressive 12 years ago, and he continues to be a stand-out on the shelf. The love and care that went into creating him are evident, and make him a very worthwhile addition to any collection. 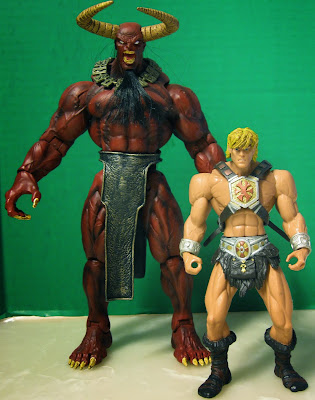 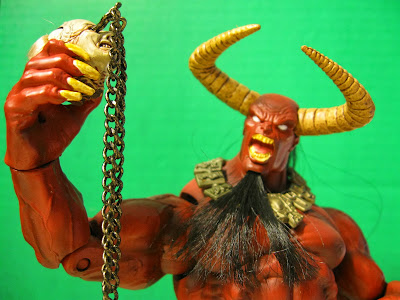 Posted by toyjedi at 4:57 PM No comments: