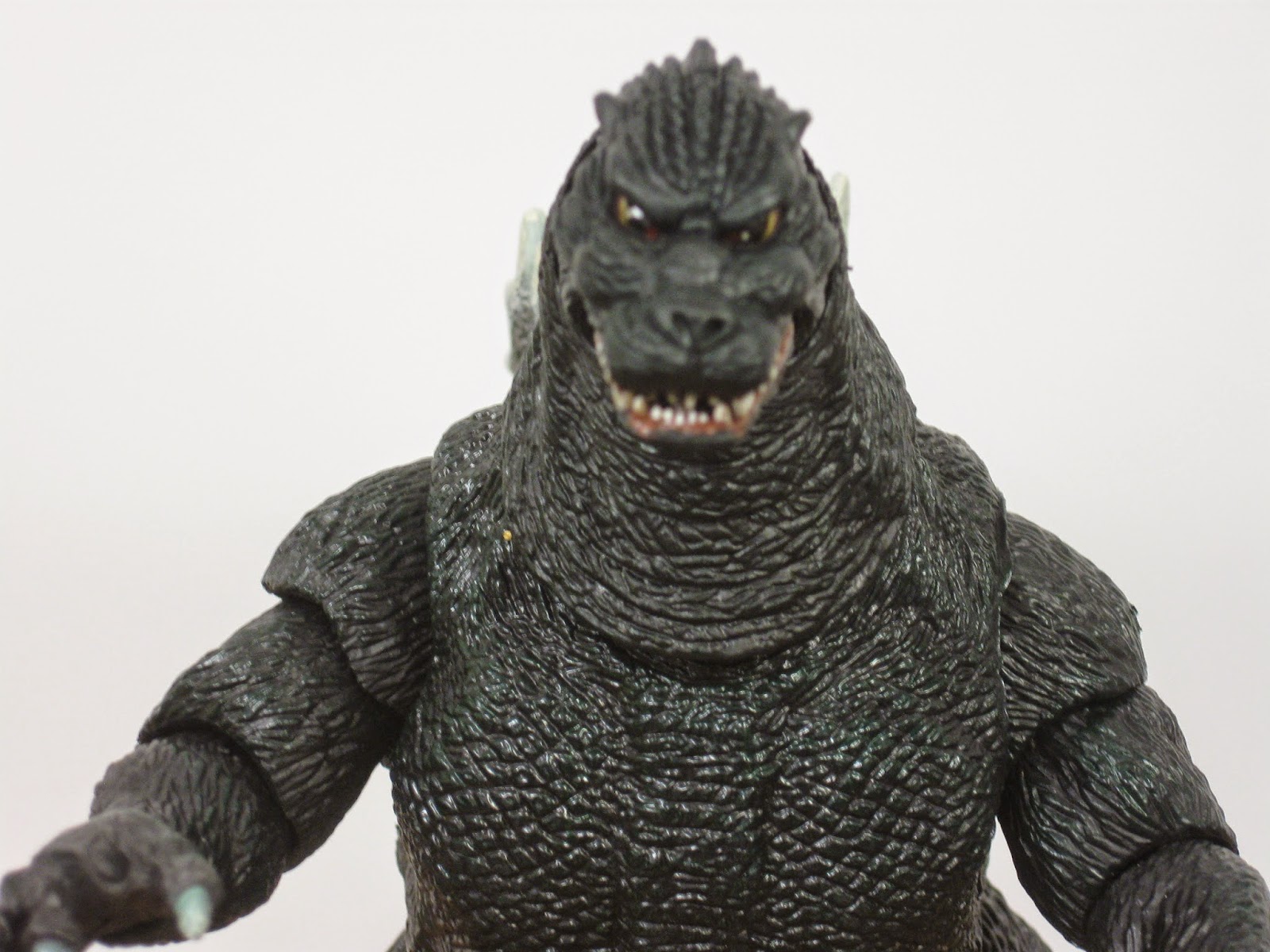 NECA’s first “Classics Godzilla” has been released, and is appearing on toy shelves. It’s labeled as “Godzilla vs. SpaceGodzilla”, and had been called Godzilla 1994 previously. It’s packaged in an uninspired clamshell that reproduces the Bandai vinyl packaging found in toy stores. My guess is that NECA wanted to keep some uniformity with those toys, so they mimicked the package, even though it really is weird that a NECA toy of Godzilla 1994 features packaging with a prominent photo of Bandai’s 1954 Godzilla as its centerpiece. 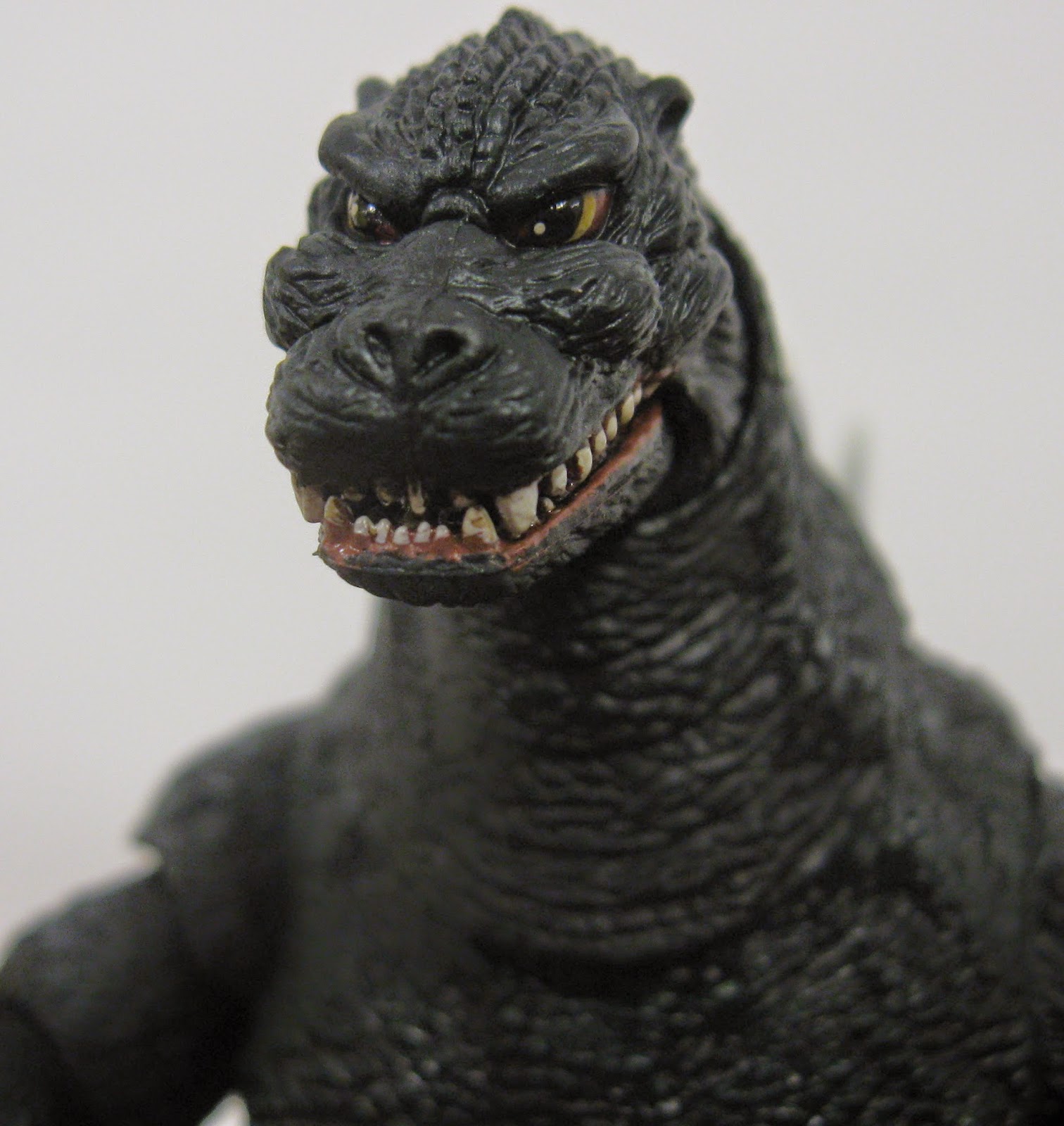 The figure itself is so much better than I had anticipated from the prototype shots, and even from how it’s displayed in-package. He’s a real joy to mess around with, and even though he doesn’t really seem to photograph particularly well, he looks great in-person. 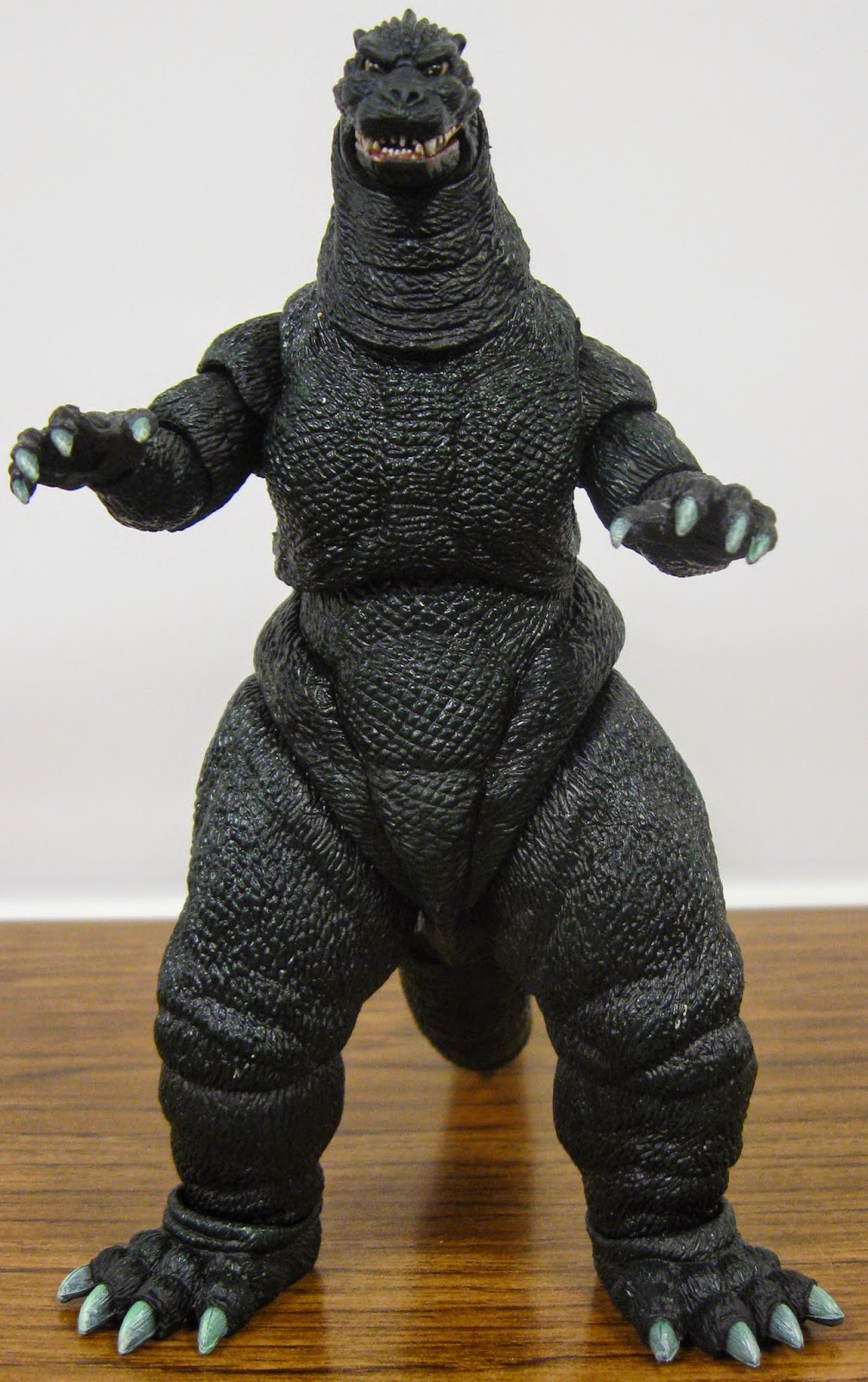 We’ll start at the head and work our way down. The head/face sculpt is both excellent and not that great. As a sculpt in and of itself, it’s really quite good. He’s got cat-like whiskers along the cheeks, and pronounced scales and ridges across the top of his head. The snarl is present, and the eyes are really beautifully painted with a deep maroon  outer edge, a yellow pupil highlight, along with a black iris and a white gleam. It’s all very crisp and sharp. The teeth are a little sloppier, but they are sharper than on NECA’s previous 2014 Godzilla release. There are two rows, and the roof of the mouth is detailed as well. There’s some bleed from the gums onto the lips, but overall the production is very good. That said, there are some problems. As far as the “not so great” goes, the snout is too elongated- it reminds me of when the guys started changing in “Wolfen” or “Underworld” or something, and their snout came pushing out. The lower jaw is also too long. It looks great closed, but when open Godzilla has a serious underbite. There’s a sheath around his neck to cover the articulation, but it’s probably my least  favorite aesthetic piece of the figure: it looks like he’s got whiplash and is wearing a neck brace to court or something. The articulation under that sheath isn’t bad- he’s got a nice range of motion to the left and right, with a slight tilt down, and a slighter tilt up and back. I’m just not sure why the sheath is there at all- my figure doesn’t get any additional movement from the head separate from the neck (he only turns at the base of the neck, in other words). 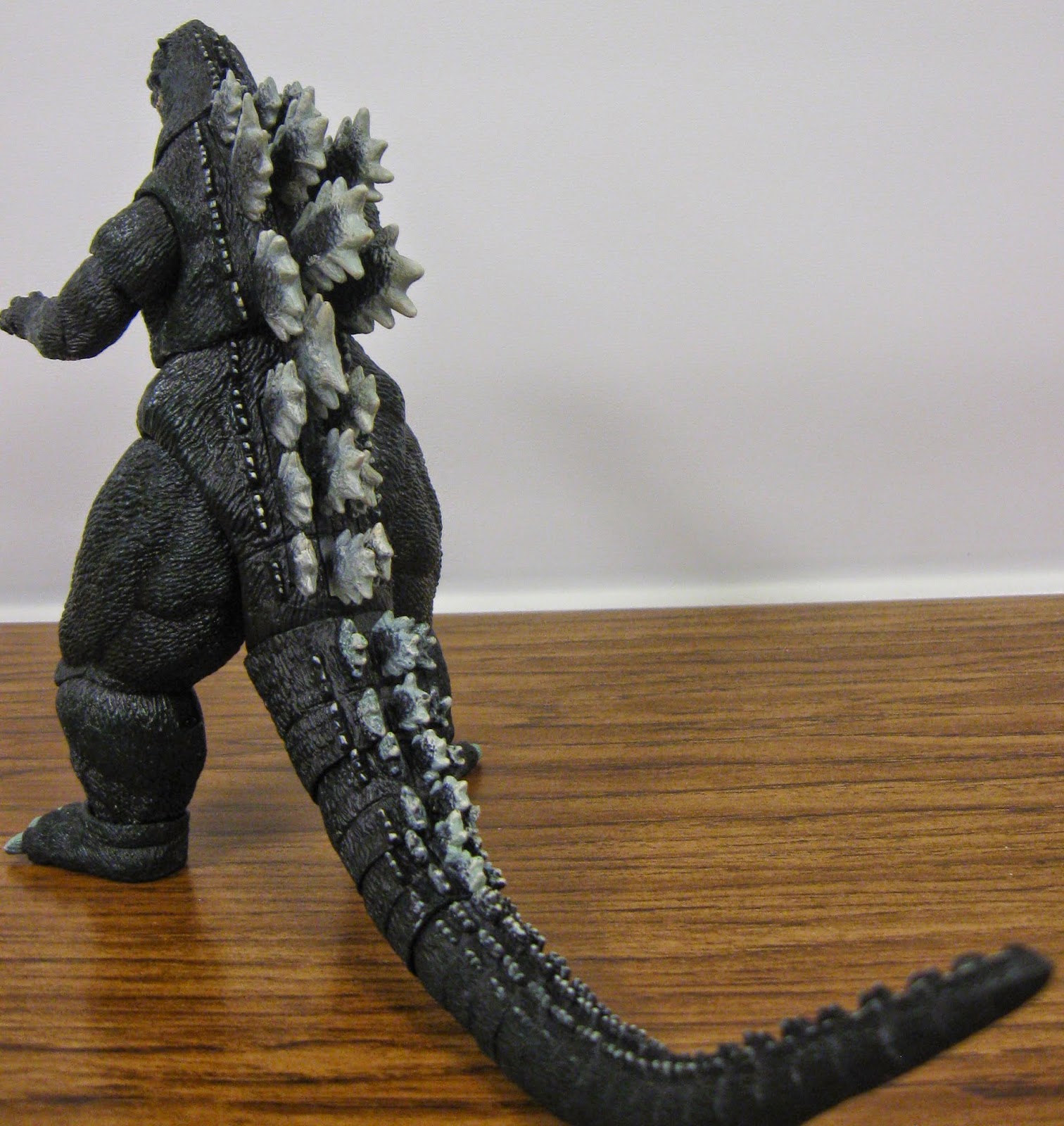 The body sculpt is good, with some detailed cross-hatching designs as scales. The dorsal spines are a soft rubber and are painted pretty well, though they do seem a little on the smaller side. He’s got a really great waist ball-joint to allow for some excellent tilt and rotation. The arms have joints at the shoulder, bicep, elbow, wrists and knuckles. The sculpt restricts arm movement laterally on my figure, but I’ve seen other reviewers who had no trouble crossing Godzilla’s arms across his chest. Even with all of that articulation, I can’t get Godzilla into his classic, “arms up in front of him, claws forward” pose very well.

The legs are great, if not a bit on the thin side (for this version of Godzilla, anyway). Movement is possible at the hips, knees (nice range here) and ankles. The tail is too short, and plugs in like the 2014 version’s did. The end is rubber with a wire, and the base nearest the torso has several joints to allow for tilt and turn. It works well enough. Godzilla’s overall color is a very dark evergreen, with some slightly lighter dry-brushed green in places. It’s somewhat glossy. The toe and finger nails are sky blue. 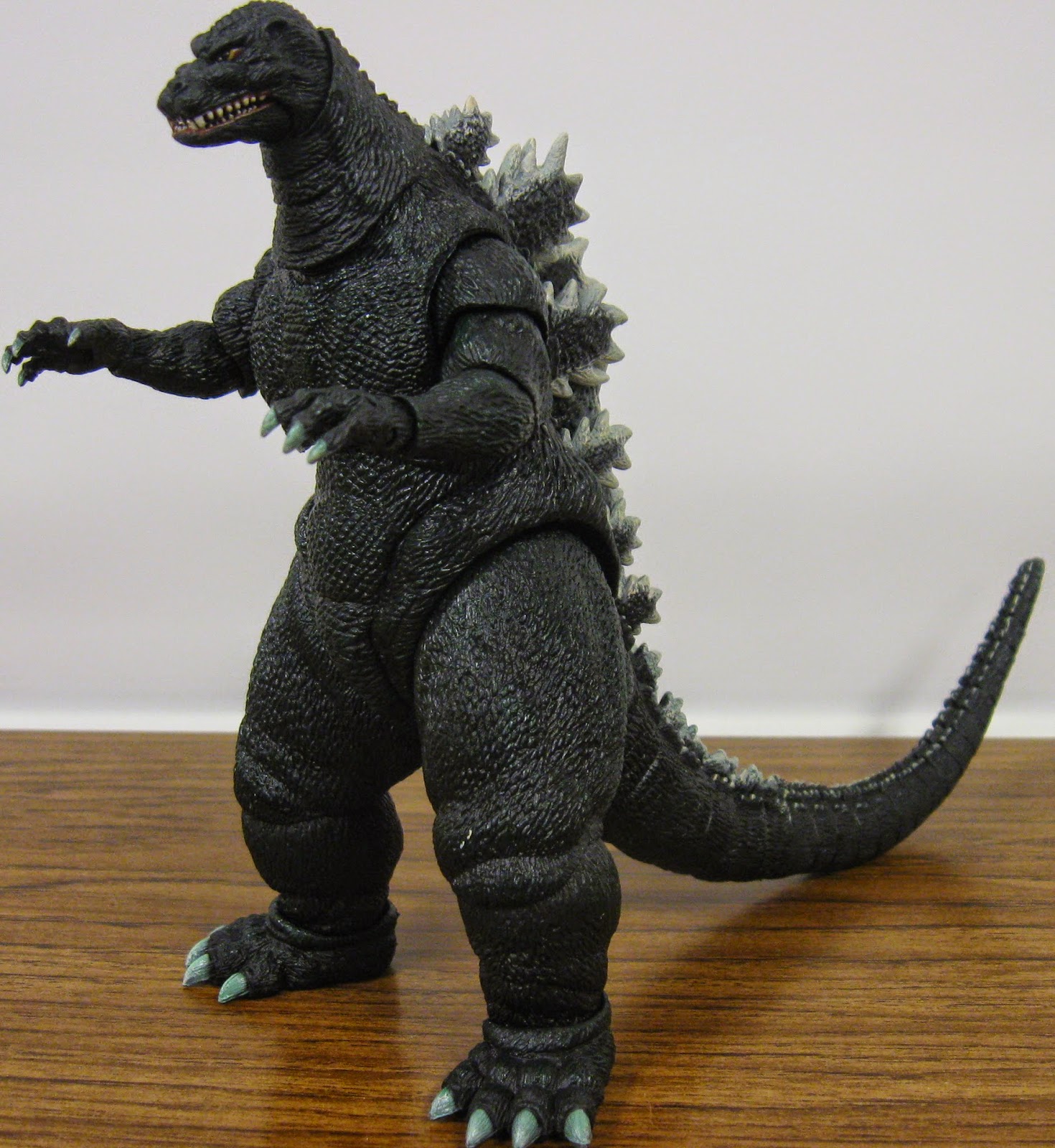 As mentioned earlier, the spines are a softer rubbery material. Their sculpt is pretty good, and the whitish outline is present, but a bot sloppy in places. Two of my spines were stuck together, restricting the torso joint a bit. I was able to work them apart, but I lost some of the white paint in the process.

Godzilla 1994 stands about as tall as NECA's Godzilla 2014 does, maybe slightly taller. They look pretty cool next to one another on the shelf, and I'm starting to really look forward to this line. There will inevitably be some comparisons of this line to the SH MonsterArts line of Godzilla figures, though that's largely unfair. SHMA figures are high-end, imported adult collectibles, while NECA's figures can be enjoyed by kids with little fear of drastic breakage. The price point is also hugely different. I can pick up 3 of NECA's Godzillas for the cost of 1 MonsterArts figure. Godzilla 1994 doesn't have any bells or whistles, isn't in a gorgeous window box, and won't generate the oohs and aaahs that an SHMA figure will, but he's a heck of a lot of fun to play around with. He looks good, poses well, and is sturdy and relatively inexpensive. 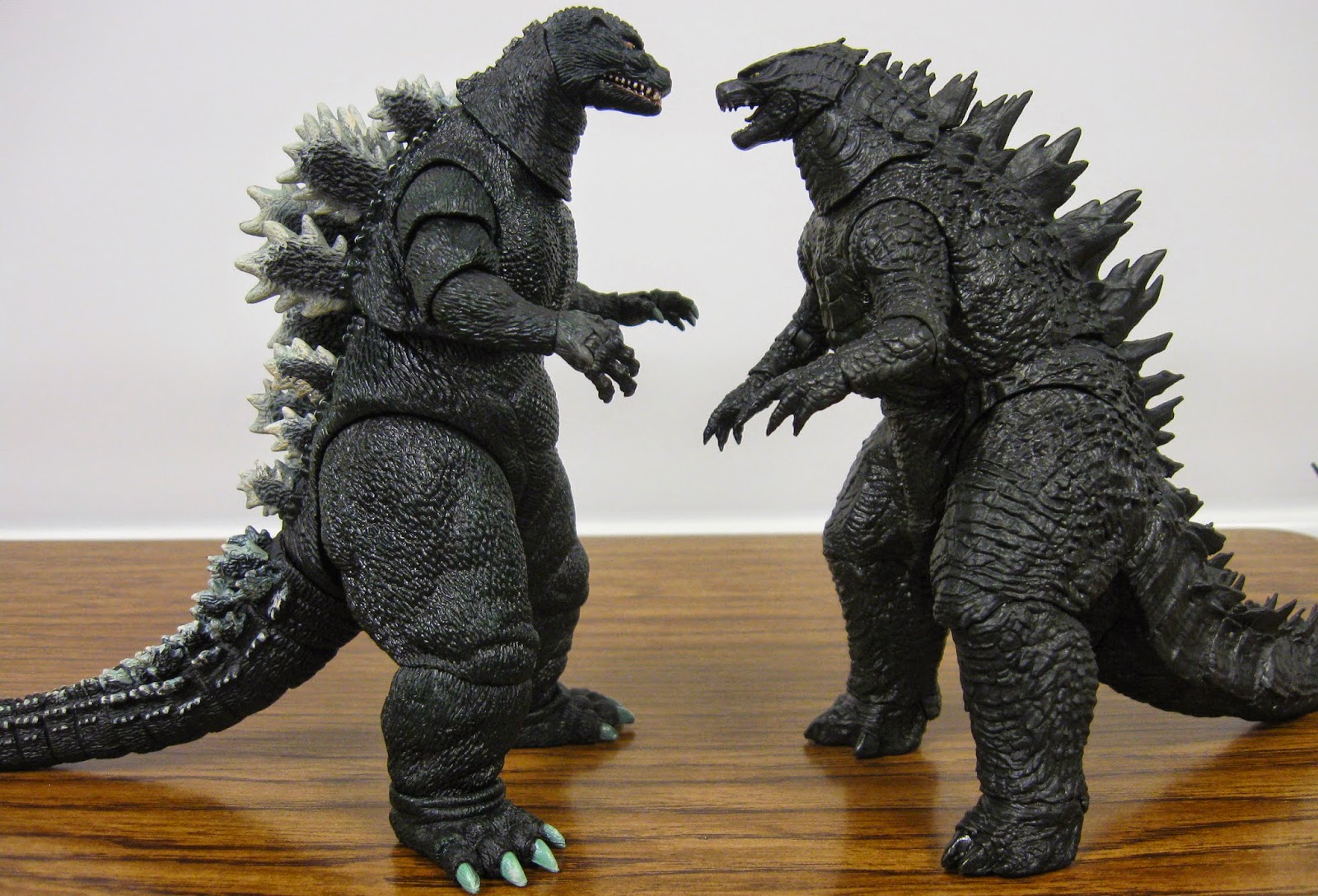 I was really hesitant about this release - the preproduction pictures looked pretty uninspired and I wasn't sure I needed another Godzilla 1994 in my collection. He didn't actually look much better in-package when I picked him up. Once out, though, this figure really started to win me over. It manages to be its own figure, despite Bandai's much more expensive SHMA version, and he's a heck of a lot of fun in-hand. Now I'm looking forward to the next figure due in the line, Godzilla 1984... 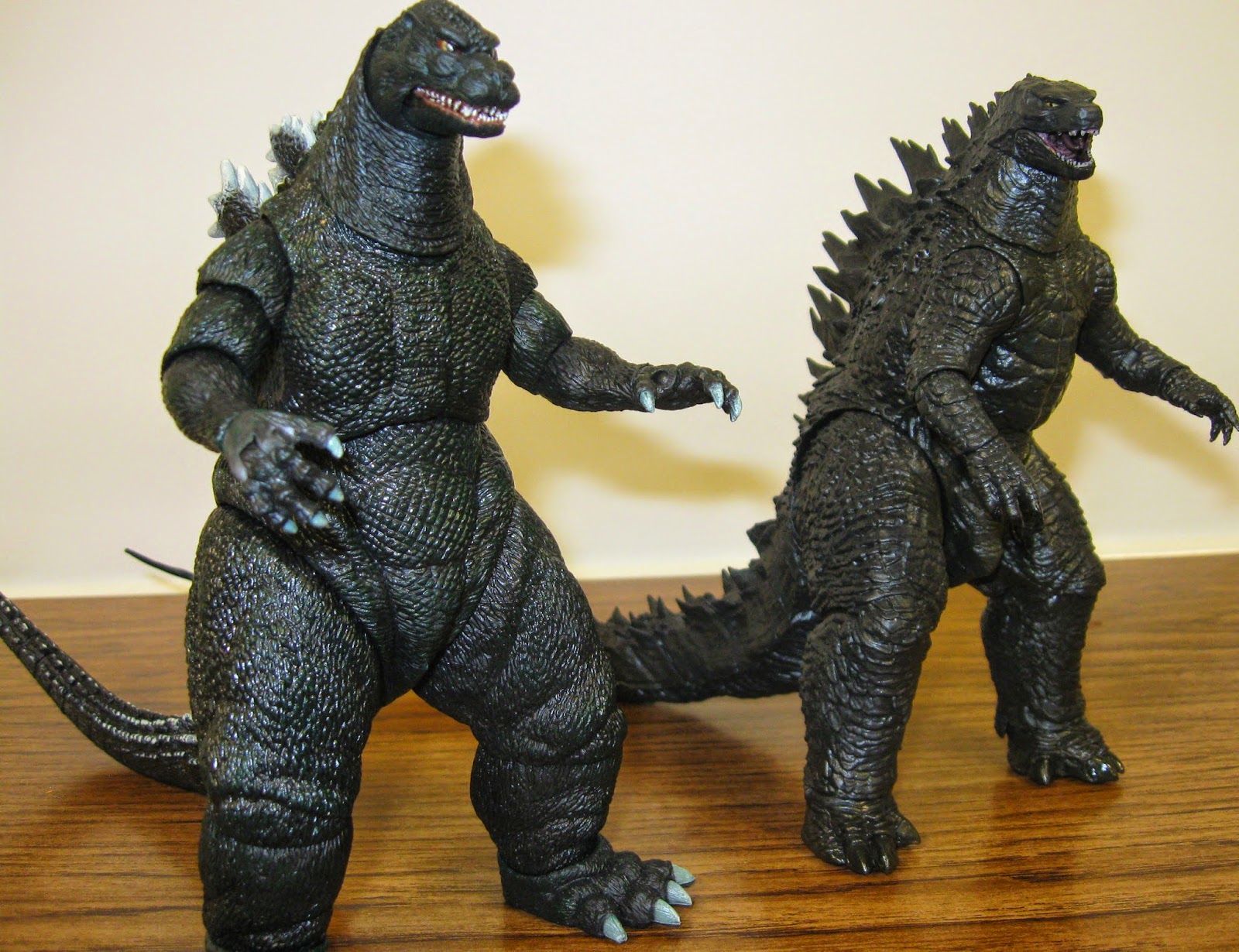 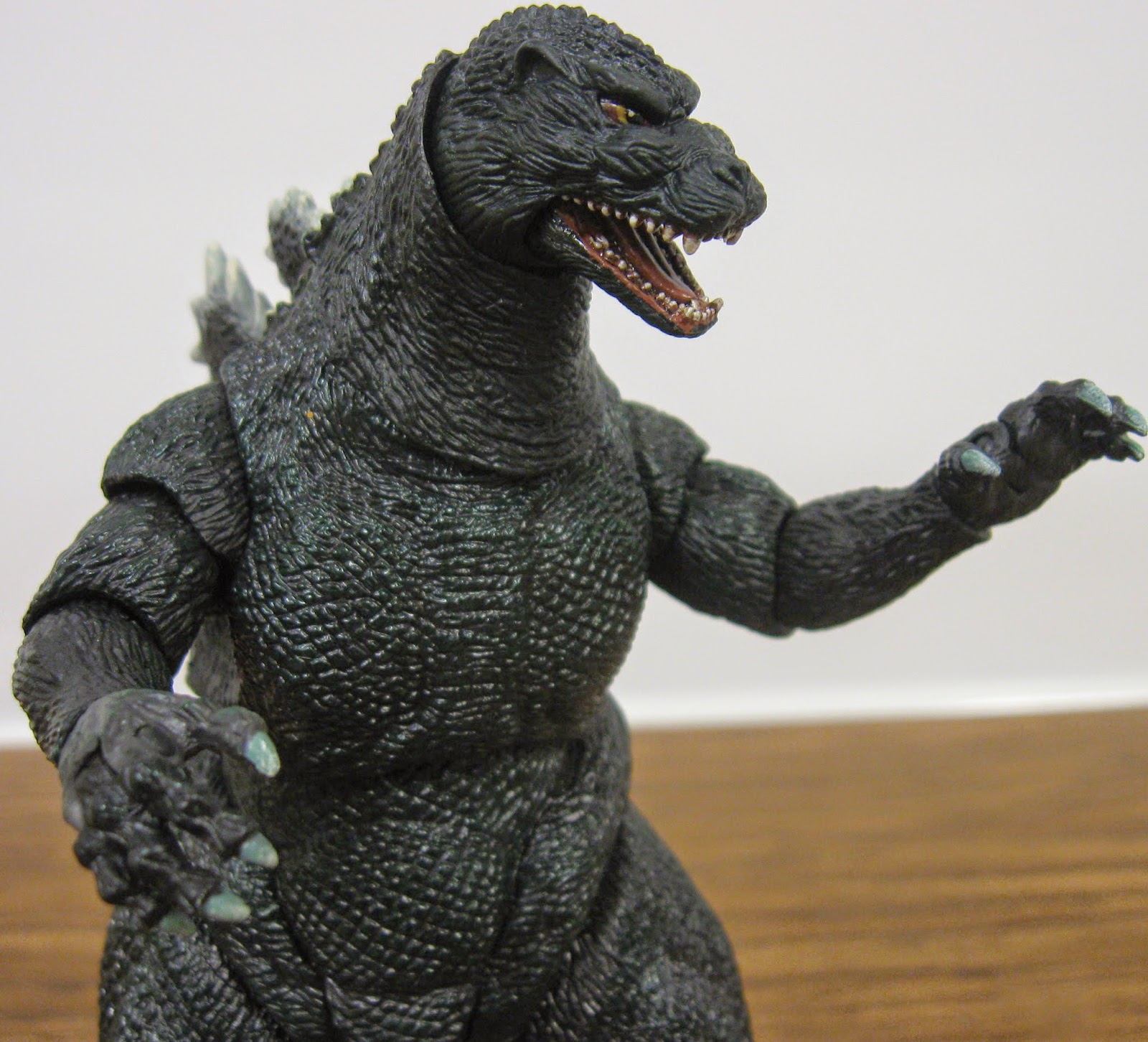