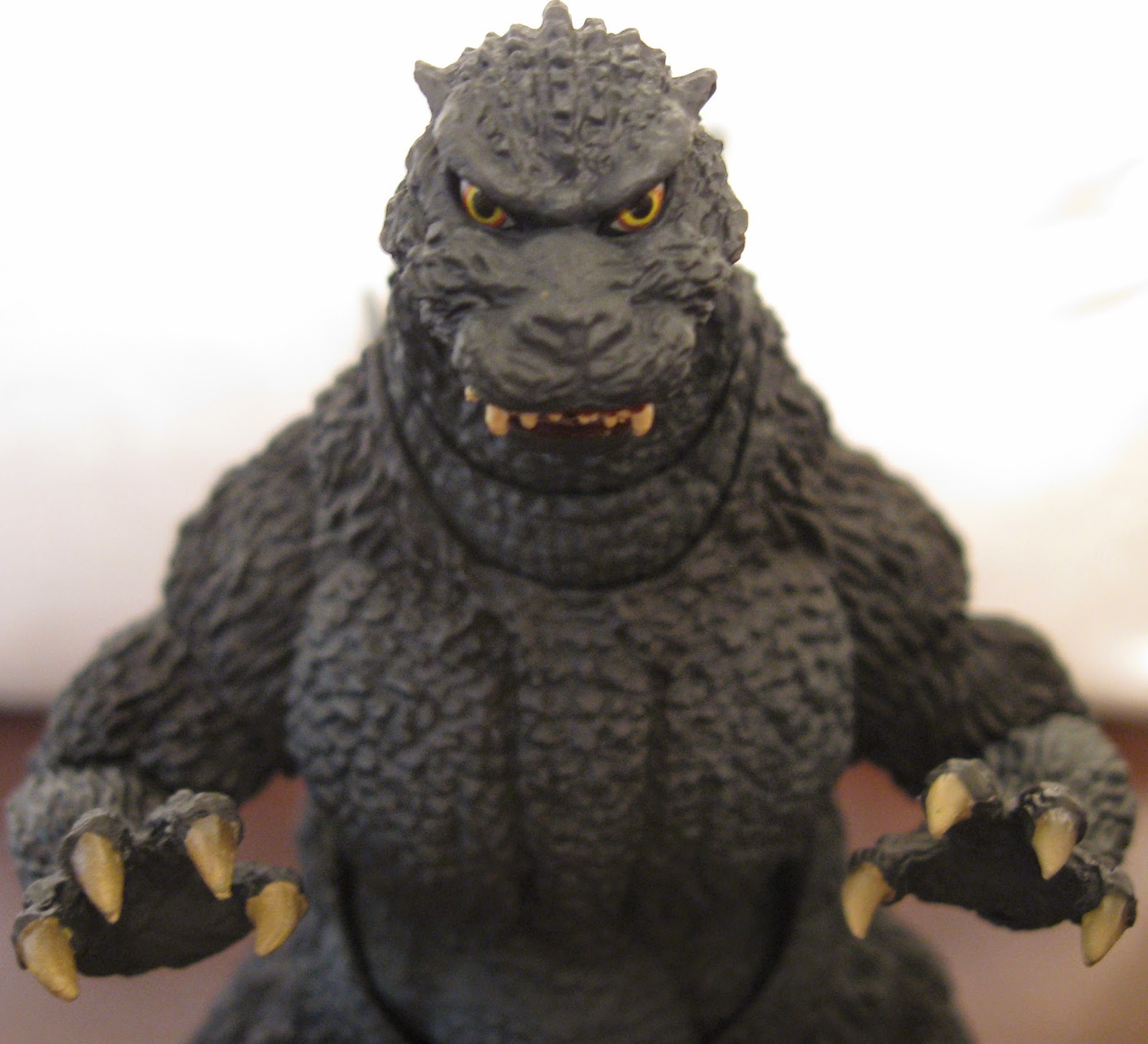 What a terrific time it is to be a kaiju (especially Godzilla) fan! There are four separate lines that are each fantastic in their own right, competing for my attention (and dollars). X-Plus makes gorgeous statues that are second to none, but which I've got to really be selective about because of their premium price-tags. S.H. MonsterArts is my personal favorite line. The scale, sculpt, articulation and wide range of figures is perfect for me, though the high prices really have me scaling back on nearly all of my other collecting. I say "nearly" with a wink, of course. Because I've also been giving my money to NECA (a lot!) lately. Their two Godzilla releases have been great, and at a hair under $20 a pop, I can buy 3 for the price of one MonsterArts figure. Finally, I've been with NECA's Pacific Rim line from the get-go. It's had some bumps, and I feel like I'm the only person who was stunningly disappointed by their Scunner figure (HATE the rubber cloak over the shoulders- just looks awful to me- and the scaling is totally wrong, but don't get me started on that...), but I'm in for the long haul, with more hits than misses so far. And Otachi really looks like she's going to be a tremendous figure. Anyway, I read a comment on a blog when this was all starting out for me (I had been collecting DCUC, MOTUC, Movie Masters and some Transformers) that said something to the effect that "Every toy collector owes it to themself to buy at least one MonsterArts figure. They are THAT good." And so I did- I got myself a first release Godzilla 1994 and, yeah, I loved it so much (derpy eyes and all) that I've been hooked ever since. That's not to say these figures are perfect - far from it. They are very overpriced and under-accessorized. Some of them fall apart too easily, or have unsightly gaps or seams. But when I look at the whole picture, it goes something like this: I really enjoy them. These are the figures on my shelf that I keep coming back to, keep taking down, keep messing around with. And they are the ones I find myself looking forward to most of all. So, I bite the bullet and swallow the cost because I feel like I get my money's worth in the joy they bring me, which is a great deal more than the hundreds of other figures I have packed in totes, hanging on walls, or displayed on shelves that I rarely notice or bother to look at. Which brings me to my latest Bandai Tamashii Nations S.H. MonsterArts figure: GODZILLA (Heisei version, alternately called "Birth" or Godzilla 1995). 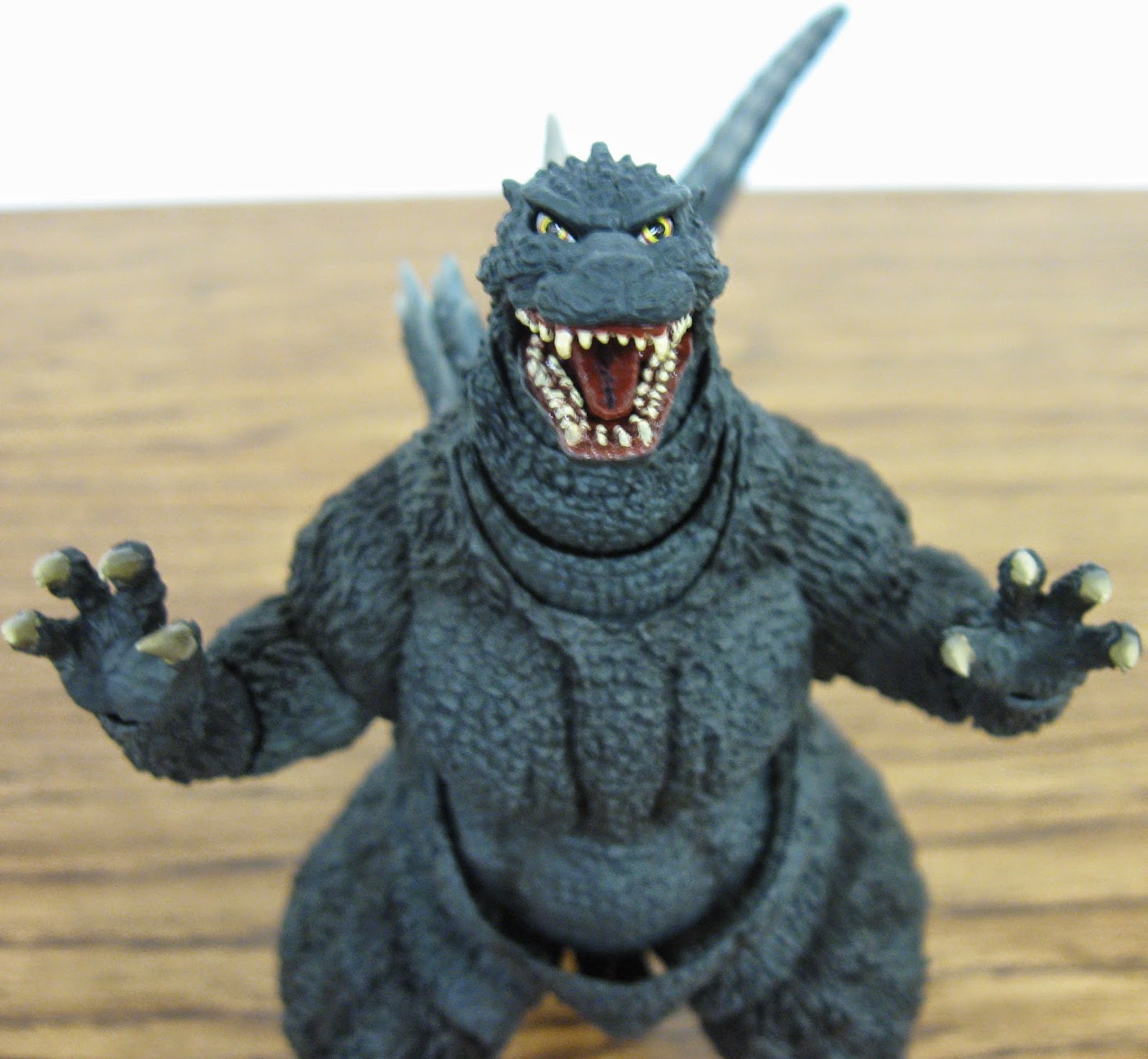 Godzilla 1995 is the ultimate Heisei version of the character and, despite the fact that it's a re-issue of sorts, it's totally worth getting even if one already owns Burning Godzilla. 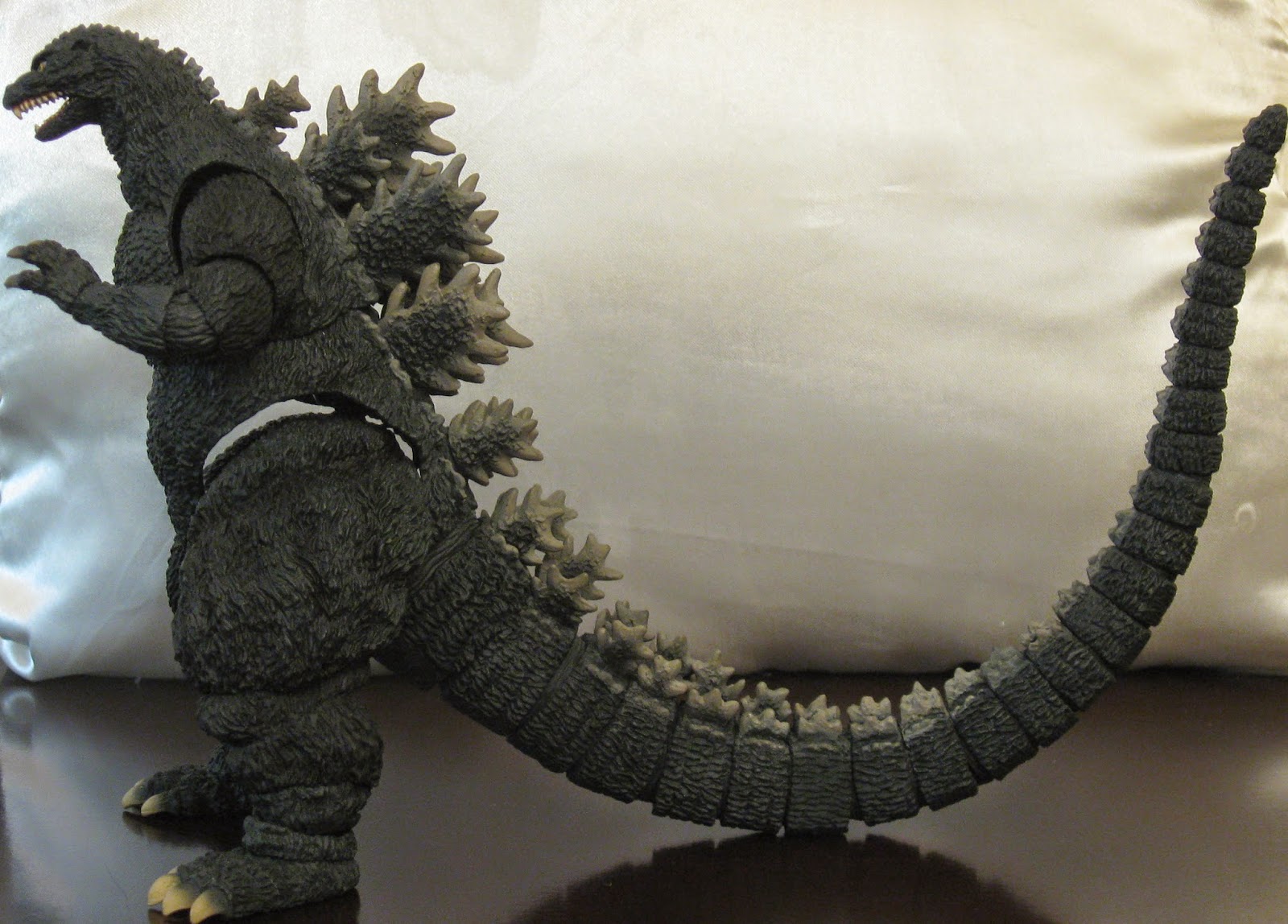 No word of a lie, this is the best looking Godzilla released for this line yet. The paint is perfect from head to tail to toes. Godzilla is painted a flat dark grey (charcoal, for want of a better term), but he's got loads of blue highlighting embedded in there. It isn't overpowering (like NECA's 12" tall Godzilla), either. You really have to see the figure under the right lighting to notice it's there at all. The eyes are absolutely perfect, and the claws have that great bone shading with faint gradations where the nail meets the toe (like X-Plus does so well, but much tinier). Claws on the hands and the dorsal spines are painted really well, too. There's a little slop on my figure's teeth, with the red of the gums bleeding over the base of some of the front teeth, but it's fairly minor. The sculpt matches the earlier release Burning Godzilla, and it's truly excellent. Great detail, and all very sharp. My major knock on NECA's Godzillas so far is their shiny plastic look. MonsterArts are painted through and through, and it makes all the difference in the world for these figures to look like articulated models rather than toys. My one outright complaint about this Godzilla's look has to do with the lower torso: he looks like he's wearing a diaper. I suppose it's easier to overlook on this version, since he's all one color, but it's still there and it's an eyesore. Yes, Burning Godzilla's gaps at the hips are present on this version as well, but it is possible to reduce them with some delicate fiddling. Otherwise, downright perfect in the looks department. 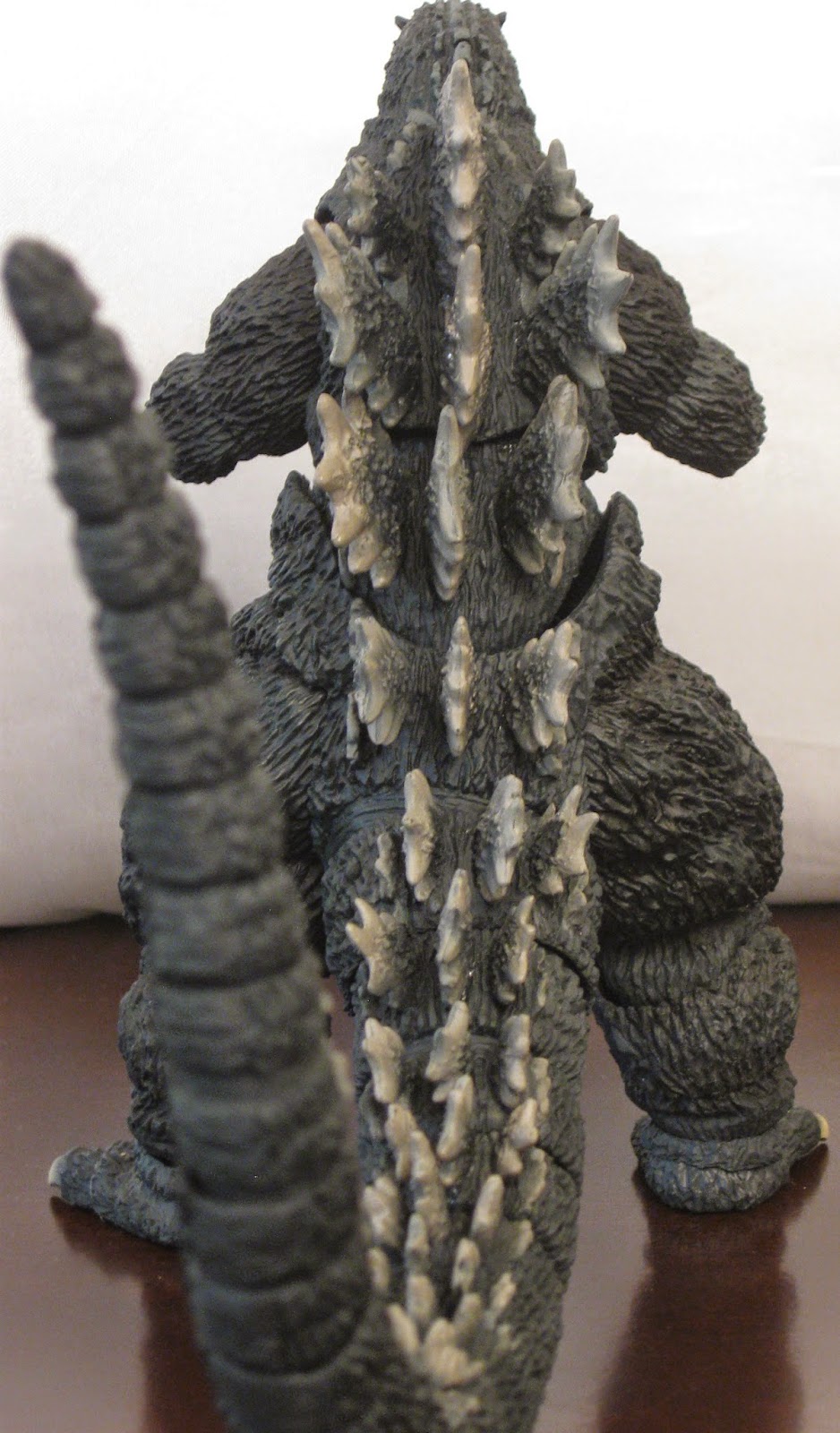 This Godzilla is great fun to play with...mostly. The joints are present and generally work as they are supposed to. In other words, you can get a wide variety of poses from this guy. In fact, he is more dynamic than the actual movie character by far. But this comes at a cost. The sockets on Godzilla are shallow and come apart very easily. My torso separates at the waist, and I've had issues with my left leg coming apart at the hip. They go back together with a slight pop, but I've contemplated trying a fix or two to keep the posing from getting as frustrating as it's been.

The tail, head and arms (especially) are great. I can get that classic "arms up in front and bent inwards" pose for the shelf.

Godzilla comes with a red-tinted atomic breath spray, stand and base. The sculpt matches the one released with the original Godzilla 1994 (which was blue for that version), making it both good and bad. The good part is that it's pretty cool and the red tinting is beautifully done. The bad part is that it was sculpted for a different figure - one with smalled sculpted fangs. As a result, this one doesn't sit right in my Godzilla's mouth. It's a close approximation, but not perfect. Nevertheless, it's great that a breath effect part was included at all, going on S.H. MonsterArts's most recent history.

Value:
This guy can currently be picked up via Amazon for $68. That's a fairly low to mid range price for an S.H. MonsterArts figure, especially one that includes a breath effect. Remember, these are generally overpriced figures with some perks that make the cost somewhat more justified: the are Japanese imports, fully painted, beautifully sculpted and highly articulated. They feel high-end. In fact, I showed this figure and a NECA figure to a friend who knows nothing about either, and he could instantly tell a significant difference.

If you want a low-cost toy that's tons of fun to play with, get the NECA Godzilla. If you want an adjustable display model that will impress from a display shelf, S.H. MonsterArts is the way to go. In terms of the line itself, this figure is one of the very best (right up there with Millennium Godzilla 2000 as the best Godzilla), along with Kiryu and Destoroyah. The price is going to skyrocket once the production run is finished. Don't hesitate - this is the best 6" scale Heisei Godzilla out there... 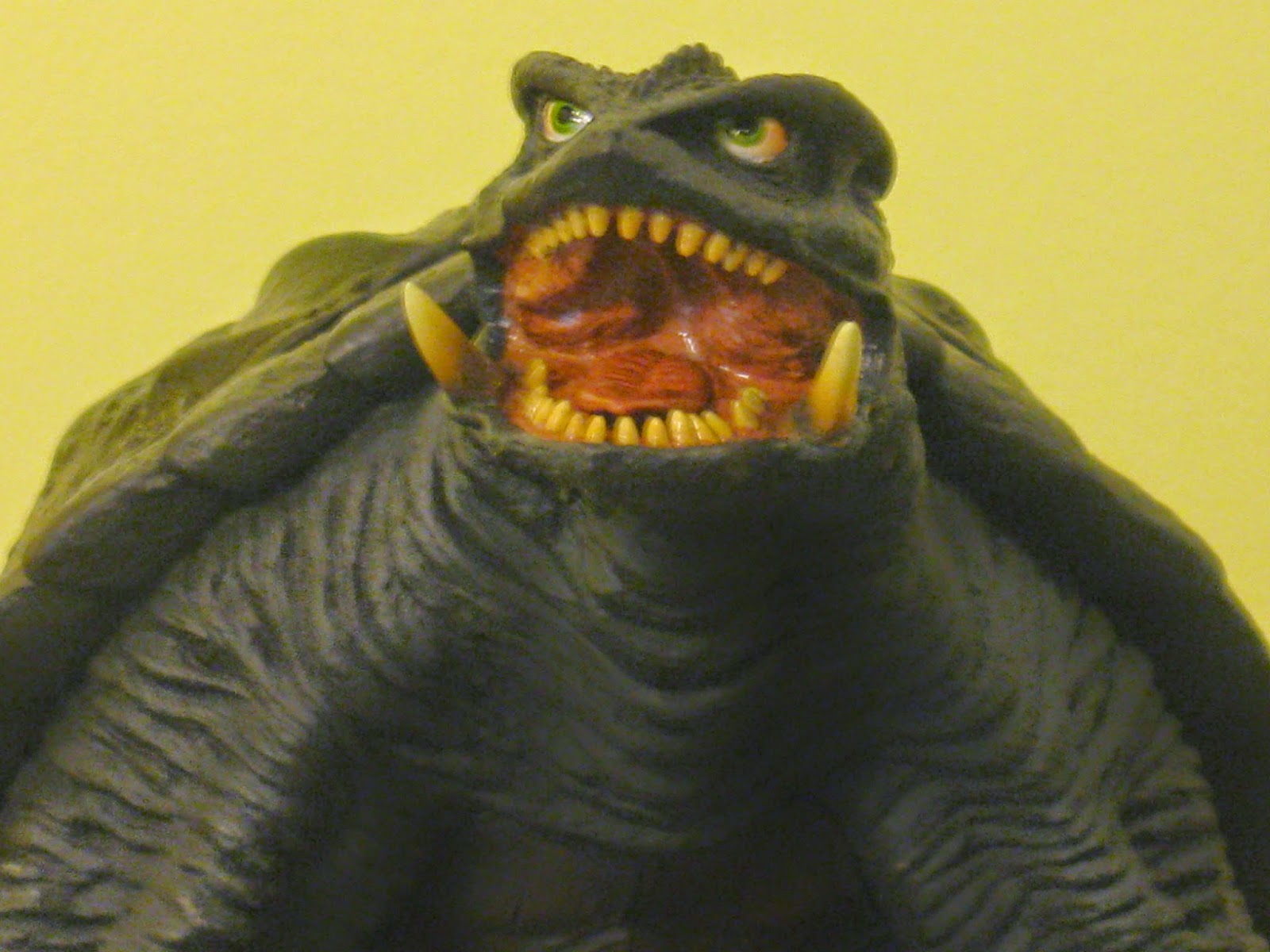 X-Plus does some pretty amazing work, there's no denying that. Their figures command a premium price for good reason. Their new Gamera 1996 version (Advent of Legion) is my first X-Plus Gamera figure, and I'm honestly thrilled that I picked him up... 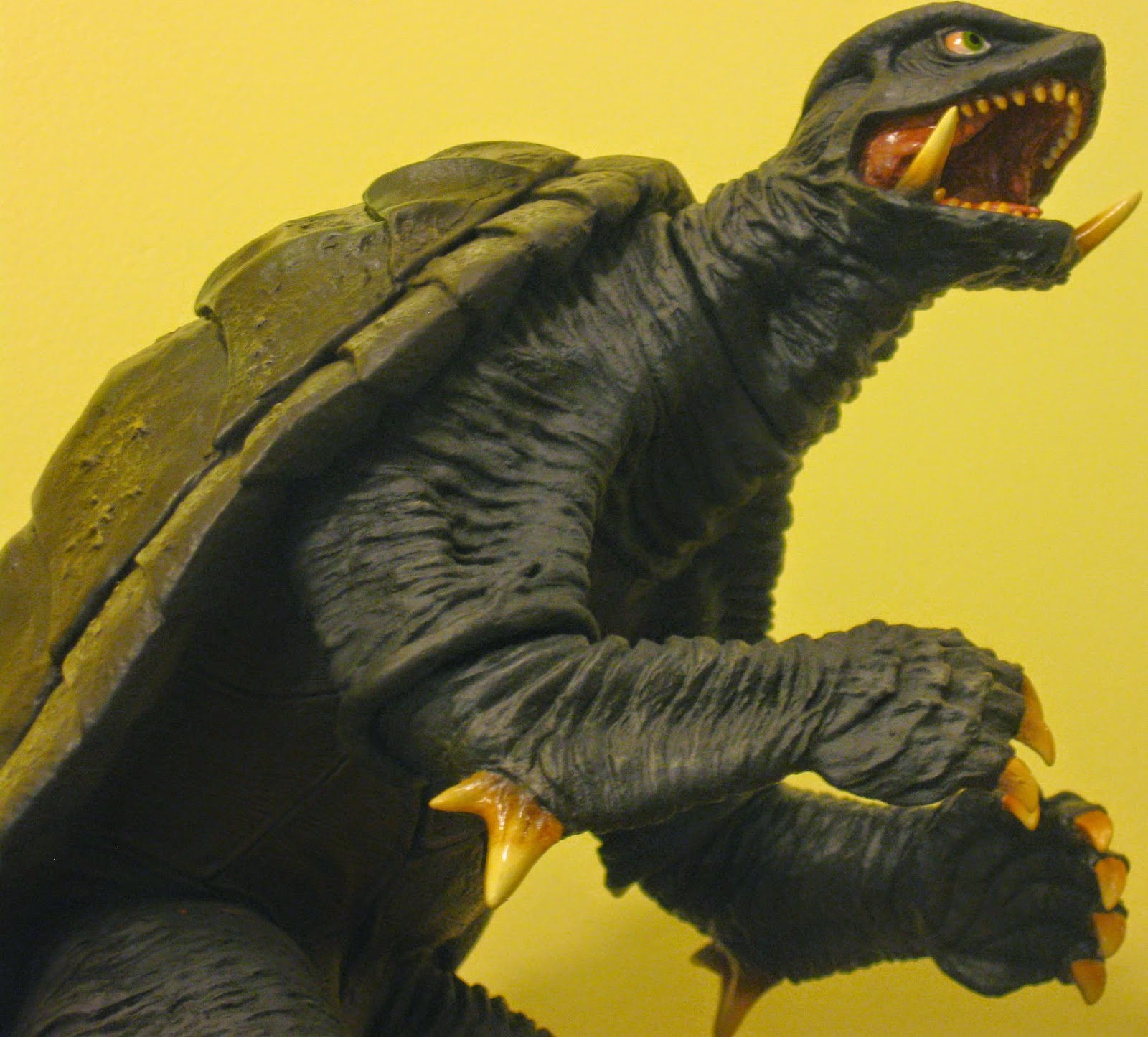 X-Plus makes highly detailed and screen-accurate vinyl statues. Their packaging is bare base (though this figure did come in a window box with lots of protective plastic and baggies on extremities), and no accessories are included. The tail must be attached, and there are no articulation points. These figures are prized for their beautiful and highly detailed sculpts and paint jobs.

This version of Gamera manages to showcase these within a dynamic pose that truly captures my favorite movie version of Gamera. Large Series Gamera 1996 stands about 8.5 inches tall, and measures just under 11 inches from snout to tail. His legs crouch wide, with his clawed toes splaying outwards and his arms bent in front of him in a powerful battle stance. 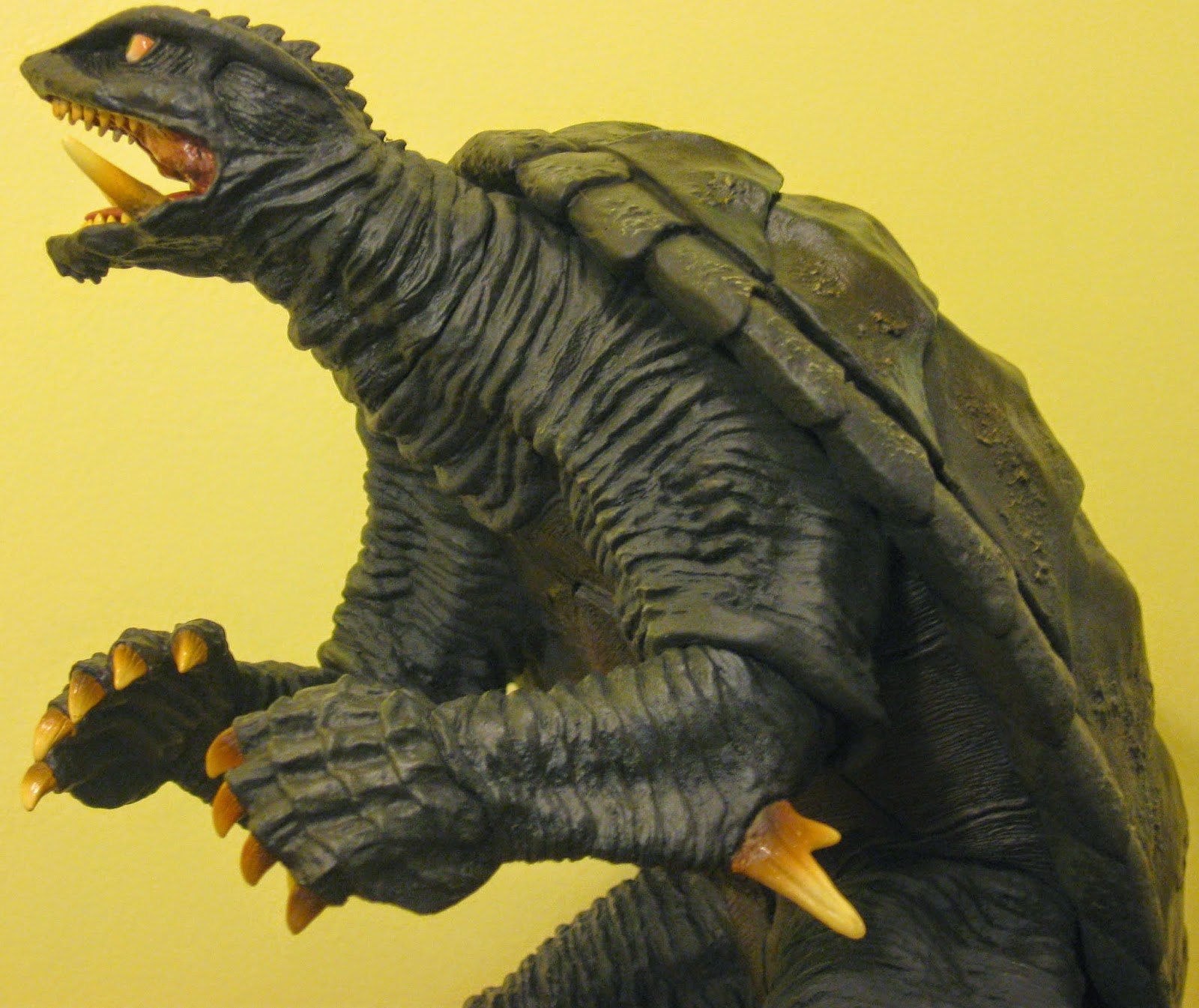 He looks great from just about any angle, though his eyes initially struck me as nearly crossed, until I got used to the way he looks face-on. His mouth is captured mid-roar with his tongue up off his lower palate. The interior of his mouth looks incredible, with perfect teeth, tusks and glistening gums. The eyes are perfect, as well, with bright green irises, clear black pupils and surrounding white fading to a pink at the edges.

Gamera's claws and toes feature fine striations and darker shading at their bases, just like the tusks. Most of Gamera's body is flat black (charcoal, I suppose), except for the chest piece, which is brownish. Tons of detail everywhere, from undulating folds of skin to the patterned undershell design of his belly. If you are going to buy a statue, you want one that will capture your attention over and over again- Gamera will accomplish that mission in spades. 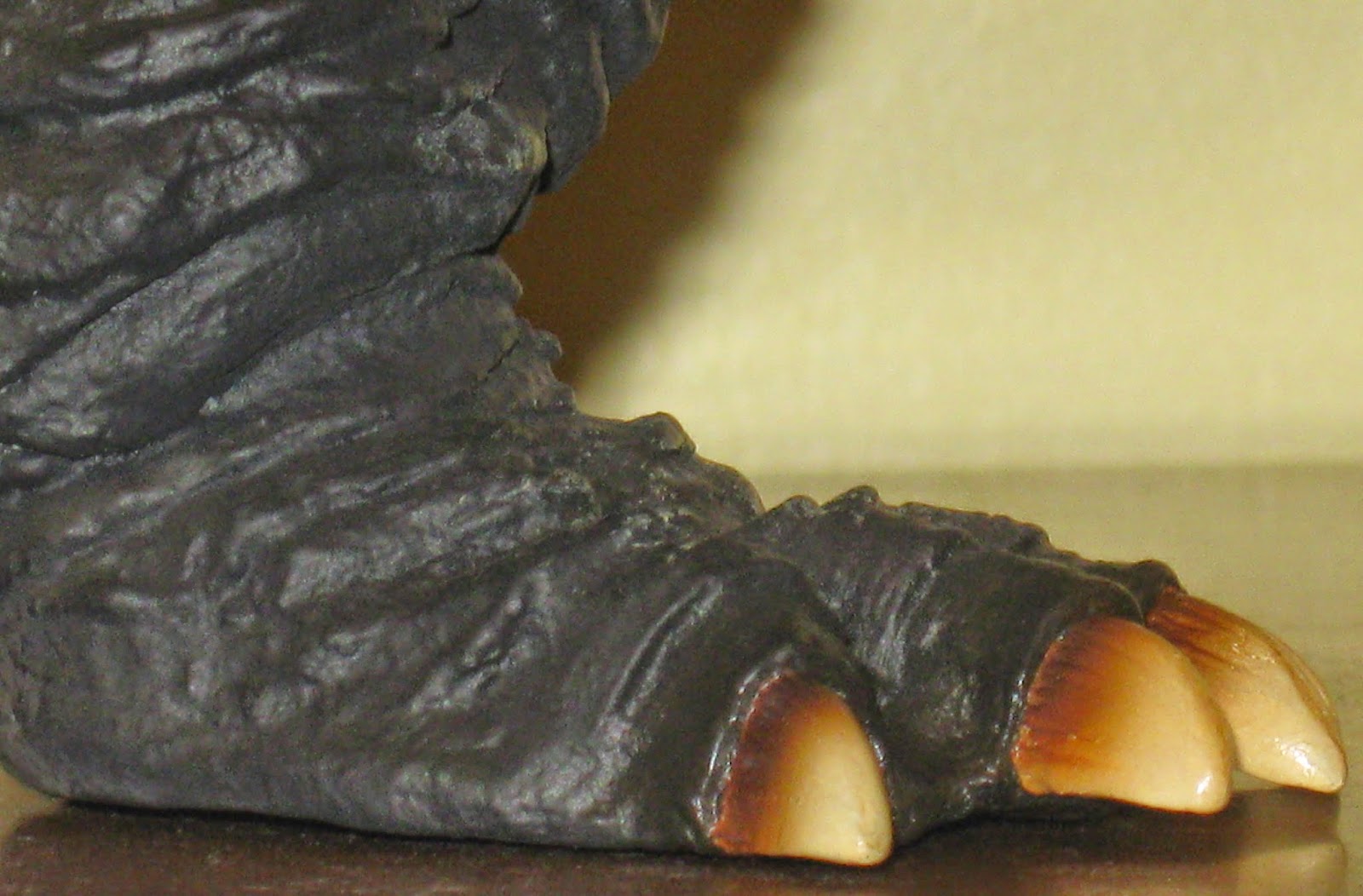 The shell, in particular, is a true work of art. Besides the amazing textured design of the sculpt, the paint work here is really exceptional. It's really got to be seen in natural light, where a complex overlaying of blues, browns and greens compliment one another to create a shimmering rainbow of bronze-like armor. It's unfortunate that all of this beautiful work resides on Gamera's back, away from the eyes of most viewers of the statue, but it's work like this that makes X-Plus purveyors of fine art, rather than "toys". 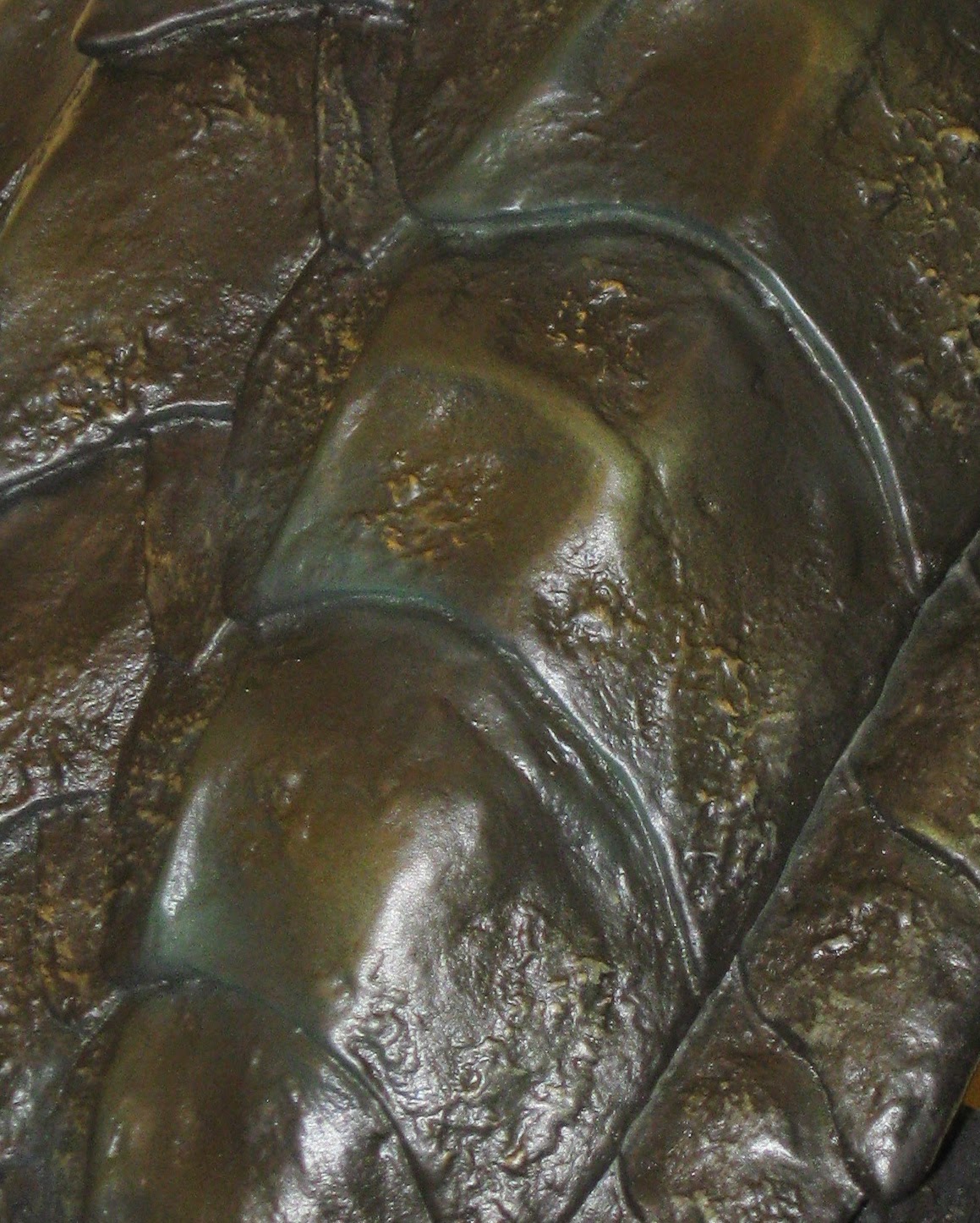 There are only a couple of small gripes I have with the figure. One, the chest piece is made of a very soft, squishy vinyl. I think this was done to accomodate the light-up feature of the Ric-Boy exclusive version (which this is NOT). There's a little bit of buckling as a result, and picking him up by grabbing his chest needs to be done gently. My other quibble is with a seam line at the base of Gamera's neck. It's VERY pronounced, and seems unnecessarily so. There are other seams at the elbows, knees, and tail (also very notice-able, but at least it's kind of hidden away underneath him), but they blend much better.

As my first X-Plus Gamera purchase, I'm really thrilled with this figure! I was lucky enough to "take the plunge" and order him before he sold out, and I'm really glad that I did. He looks amazing alongside the rest of my Gamera collection, and even beside my other couple of X-Plus Godzilla figures. The size is just about perfect for what I wanted, and the sculpt, paint and pose really do the character justice. It's a beautiful representation of my favorite version of Gamera. I've checked out the larger Gamera 1996 and Gamera 1995 figures from X-Plus, and they are a little too crouched/hunched over for my tastes. This guy is just about perfect. I'm currently watching "Revenge of Iris" for the third or fourth time, and his look in that film is growing on me. Might just have to keep my eyes open for one of those amazing Gamera 1999 figures from X-Plus, as well... 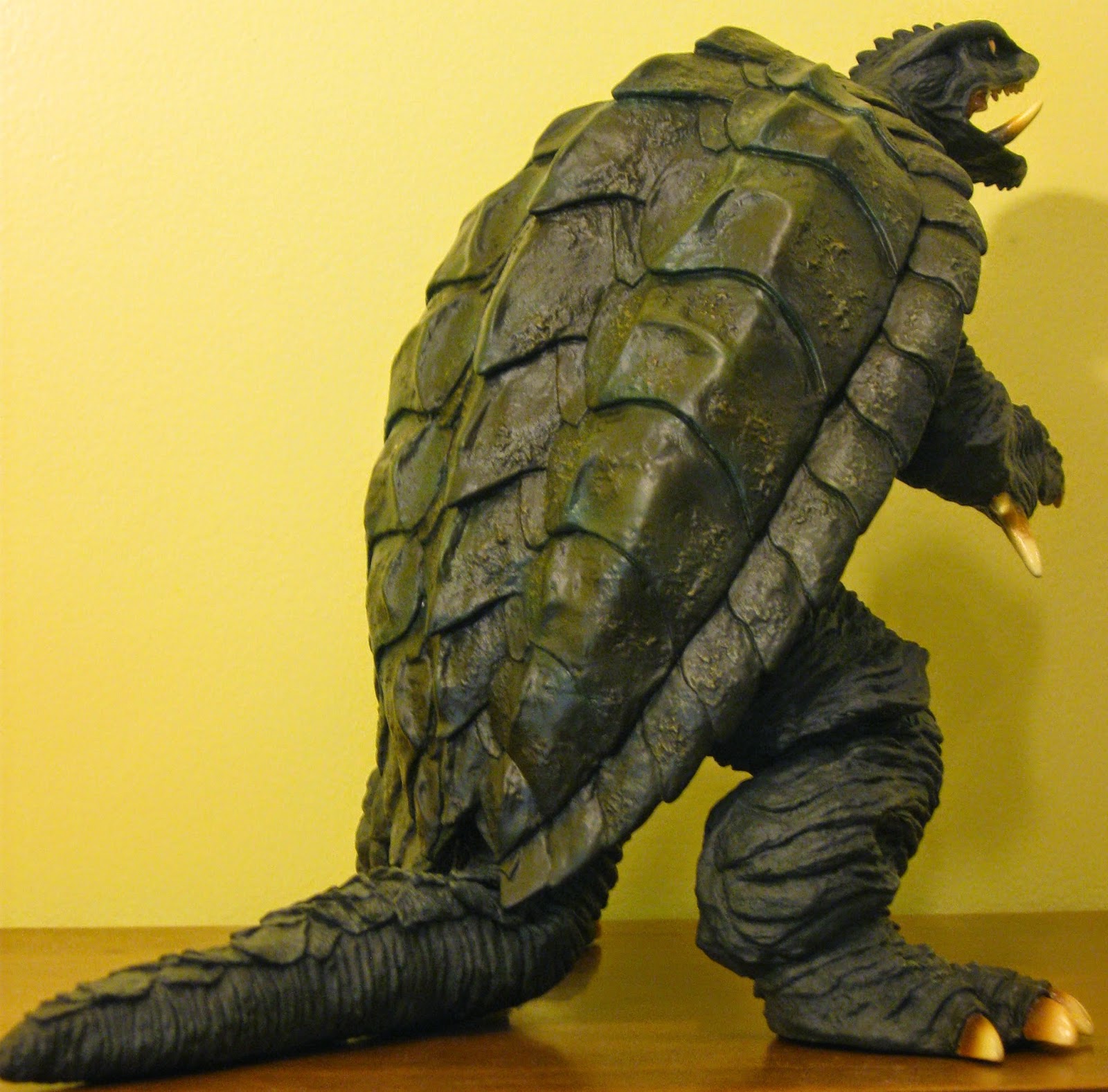 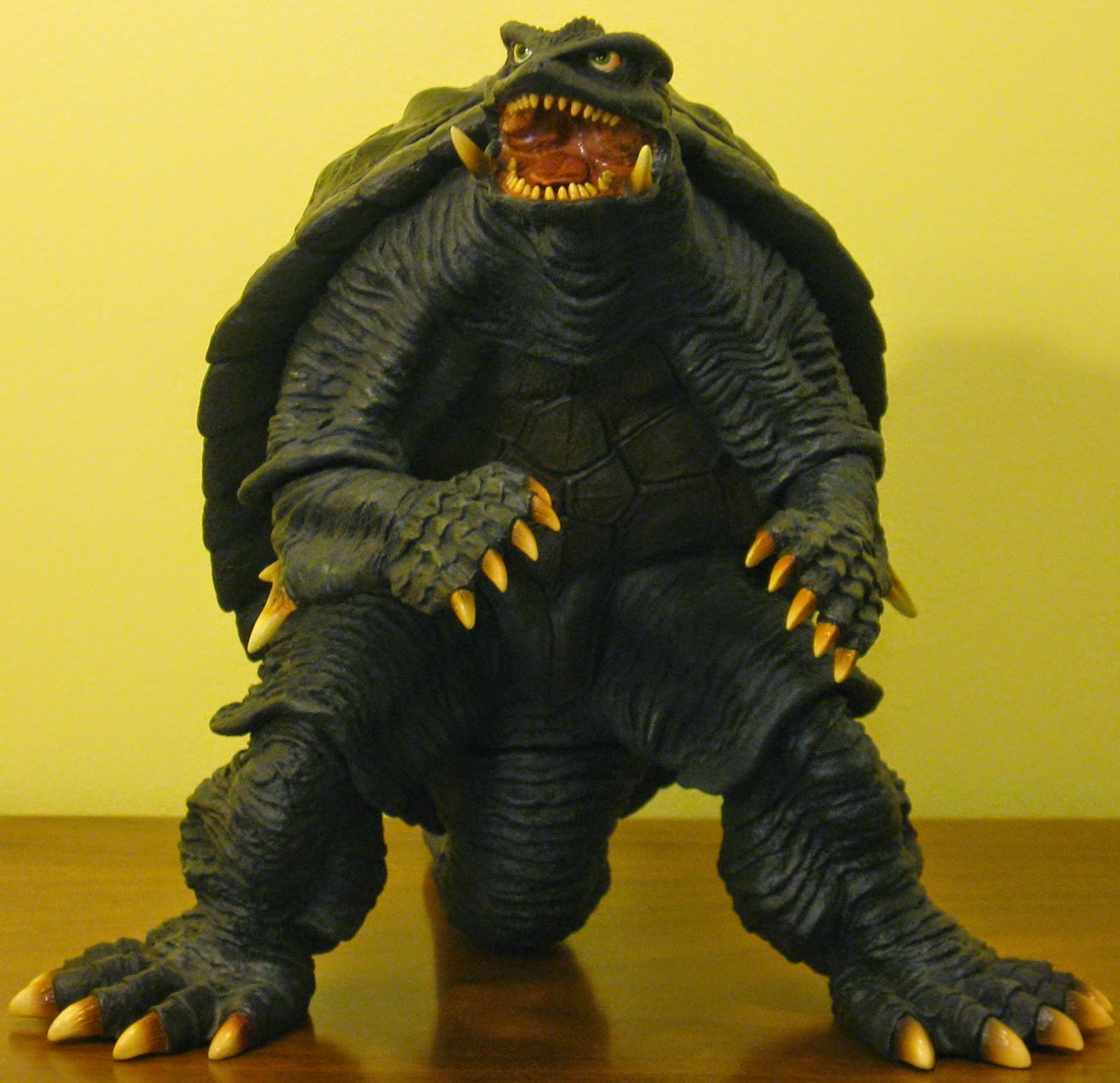