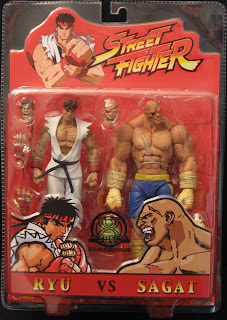 This 2-Pack, released by SOTA Toys in 2006, features Ryu with an alternate screaming head, 2 Hadoken hands, 2 fists and his traveling bag, and Sagat with alternate head, and 2 open hands and 2 fists. The figures are beautifully sculpted and superbly articulated. This set shows Sagat with his scar healed, and his imposing size and impressive sculpt make him my favorite figure from this line.

Ryu is a bit bland in comparison. His standard expression is pretty blank, and I feel like the chest sculpt is a little overdone, in the sense that there are a lot of lines (striations?) sculpted over the pectorals that aren't very convincing to me. That said, it's Ryu! 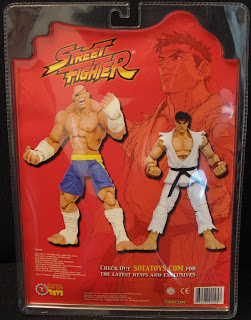 I'm hesitant to open the package for any of these SOTA Street Fighters because 1) they are so relatively expensive on the secondary market,  2) the couple that I do have out of package tend to loosen their joints pretty quickly and 3) Storm Collectibles and SH Figuarts have new Street Fighters on the way for my shelf. As a result, the SOTA figures are hanging on my wall for display. 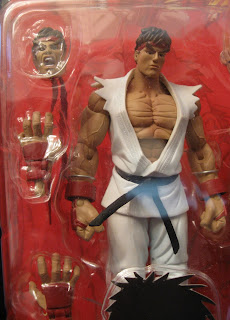 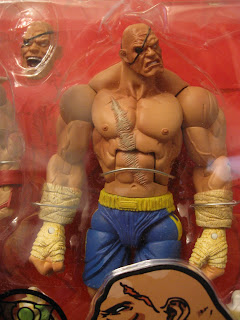 Posted by toyjedi at 5:57 PM No comments: 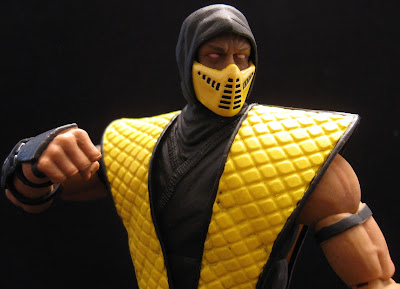 I missed out on SOTA's Street Fighter figures. What I mean is that I completely overlooked them when they were available at retail. I have no idea what I was focused on at the time - probably Spawn or Star Wars, but I didn't realize what they were producing until it was too late. I have been able to pick up quite a few on the secondary market, but their prices have been so high that I've chosen to keep most in-package. I think it's maybe because I'm not much of a gamer, especially when it comes to fighting games, that I didn't bother with them originally. Tekken, Mortal Kombat, Street Fighter, Virtua Fighter and the rest are just properties I didn't pay much attention to. But something happened along the way: I got hooked on Udon's Street Fighter comics. I loved the characters, loved the story line, and discovered that I had missed out on what many collectors might consider to be one of the best, if not the best, action figure lines ever made. SOTA's Street Fighters had it all - scale, sculpt, articulation and accessories - and the line had depth! I've literally been waiting forever for someone else to pick up the mantle and tackle the line with as much respect and professional love for the property as SOTA had. I had high hopes for NECA when they released their SFIV line, but it was short-lived: only 6 characters were made. 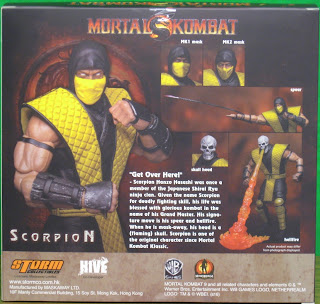 And Mortal Kombat? Jazwares made some of the poorest quality figures I've ever seen, and they still command incredible prices on the secondary market. So that shows an interest for the property, right? Well, Storm Collectibles has finally decided to put in a play for both Street Fighter and Mortal Kombat in a rough 1/12 scale, and I couldn't be more thrilled. These look like exactly what I've been waiting for, for near on a decade. I've only gotten Scorpion in-hand so far, but he's so good that I went ahead and cancelled my Figuarts Ryu pre-order and pre-ordered a second one from Storm instead. I'm all-in for these guys, and I couldn't be happier. For this review, I'm taking a look at Storm's initial MK offering: Scorpion. 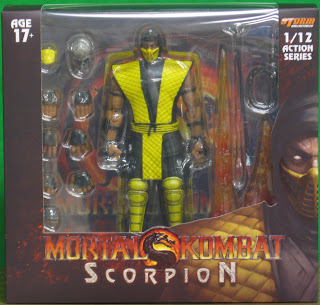 To begin with, the packaging is perfect. It accomplishes my 4 most important things: 1) it protects the contents, 2) it shows you exactly what you are getting, 3) it is completely collector-friendly and 4) it looks just as good on display for MIB collectors. Storm's packaging is attractive, features terrific artwork, and is visually appealing.

Scorpion comes with 7 additional hands, a coiled spear-tipped rope, a thrown spear-tipped rope, an alternate "cloth" mask (MKI version), a skull head with articulated jaw and a 2-piece Hellfire effect part. Everything is housed sandwiched between two plastic trays, safe and sound. It's a nice selection of accessories, and provides just about everything one could need to pose this figure in a wide variety of ways. 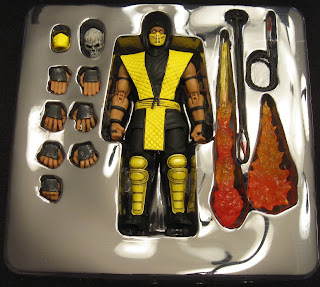 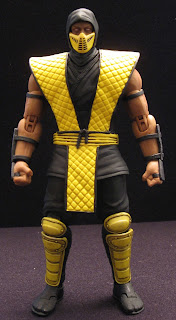 This figure itself is impressive in nearly all aspects. The articulation is plentiful, well-thought-out, practical and (with the exception of the elbow joints) nearly seamless. The joints are mostly tight (my ankles are a little loose, but he still holds poses fine), and nothing falls apart MAFEX-style. He's fun to play around with, and one can generally find satisfactory looks with this guy without too much difficulty.

The paint is at an equally high level of production. There's a faint airbrushing to highlight the arm muscles, and a silver dry-brush applied to the gloves and forearm armor. The shin guards and knee pads are also weathered impressively to add depth and realism. In all, the sculpt covers the articulation, which is excellent, and everything is complimented by the paint. It's exactly what anyone could desire from a high end collectible action figure.

In general, I am just as pleased as everyone else who gets this guy in-hand seems to be. I particularly love the plastic they chose to use. It's durable, weighty and looks amazing. The flesh-tone plastic is particularly striking visually, and feels great, as well. I personally prefer the MKII mask over the cloth-style version, which just seems too bulky to me on his face. My one issue with the figure (and it's a relatively minor one) has to do with the sculpt when the figure is viewed from the side.

From that angle, he appears somewhat flat. I think this may be an optical illusion brought on by the wide tapered V of his outfit, combined with the bulk of his arms, but the figure seems like it needs more of a chest sculpted in. It looks particularly odd when the flaps are pulled down out of the way and the figure is viewed from the front - there are no pectoral muscles. Maybe Storm figured that would be covered anyway, and additional bulk could impede the articulation? In any event, it's mostly evident in a vanilla pose, when viewed from the side. Otherwise, this guy is just about perfect in every way! I'm still eagerly awaiting the release of Ryu and Sub-Zero, and with the NY ToyFair reveals of Bearded Ryu and Reptile shown earlier this month, my excitement is still running high. 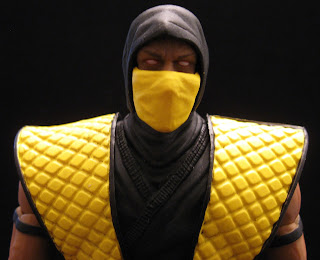 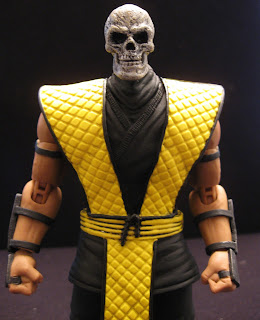 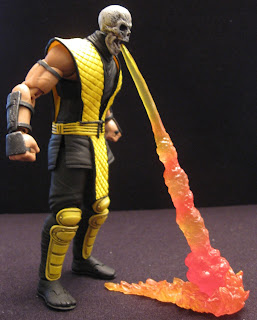 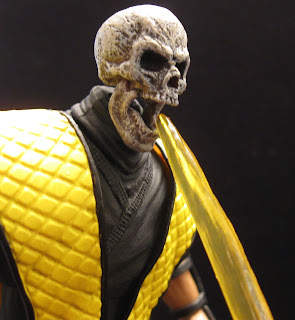 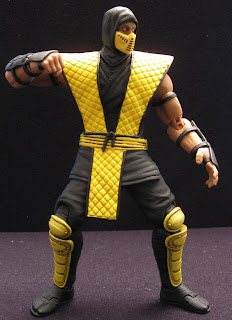 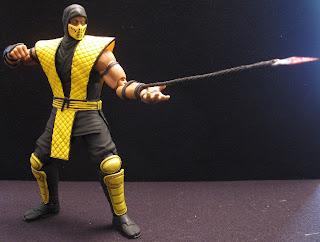 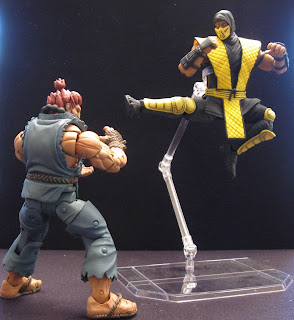