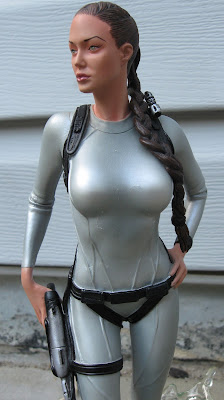 My collectible interests come and go, often in fits and bursts. The length of those bursts varies greatly (I had a strong two months of intense dinosaur collecting, while my Godzilla phase lasted nearly 15), with a very small group of exceptions: those things I seem to always come back to. Amongst them are Batman, Darth Vader and Lara Croft. I never played the original Tomb Raider games, but I was aware of the character. I saw, and mostly enjoyed, the first movie. I even find the sequel, "The Cradle of Life", to be fairly entertaining (if I don't stop and think too much), and I think Angelina Jolie seemed to really step into the role much more solidly. That was about the extent of my Tomb Raider experience. Nevertheless, I had accumulated quite a decent collection of figures.

I have figures from Toy Biz, Playmates Toys, SOTA and NECA, and I like them all in their own ways. My recent completion of the 2013 Tomb Raider reboot shot a new charge into my Lara Croft interests, and I've added Play Arts Kai's version, as well as the Gaming Heads "Survivor" statue (reviewed on this blog) to the collection. Which brings me to the subject of this review: the "Wetsuit" statue from "Cradle of Life". I have all of SOTA's movie figures (there were only 3), and I think they are some of the very best, most complete Tomb Raider action figures ever made, combining excellent sculpts with adequate paint and articulation to give me the most posable Lara possible (in theory, that is - much like the PAK version, I can't get the articulation to work as well as I'd like). That said, I never ventured into the SOTA statue realm. I've been aware of this statue for a decade, and I've never quite taken the plunge. The price was just higher than I was willing to go, for something that didn't quite capture Jolie as well as I'd like.

That all changed when I caught I decent deal via ebay. So, here she is. After a decade of waiting, I've finally added SOTA's "Wetsuit" statue to the collection... 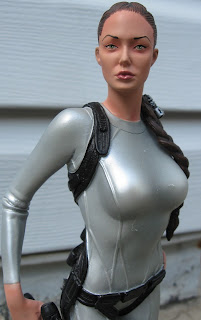 This statue had a run of 2,500 made, and overall it's pretty well done. With the base, it stands just under 12" tall (the figure itself is just under 10"). It has some really nice qualities, and a few gripes, as well, but I'm happy to have made the addition.

Let's get this out of the way first: the face is "off". It's not ugly, or sloppy, or anything like that, it's just not quite "Angelina Jolie". I was trying to figure out why, when my daughter walked in, took one look and said, "Her eyes are too small." Hit the nail on the head. I put the 6" figure beside the 10" statue, and what do you know? The eyes are nearly exactly the same size. So, yeah, maybe that's it? I think she could also do with a better sense of shading and eyebrow detail. But the hairline is better than on the action figure, and (like I said) it's not necessarily "unattractive", just not quite Angelina.

The rest of the sculpt seems to be proportioned pretty accurately. There's a nice level of detail to the hair and braids, as well as on the shoulder light. 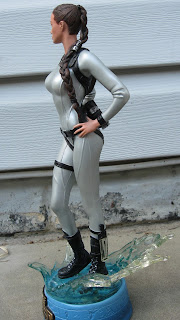 In a real oddity, though, the amount of detail/paint applications on the statue are really hit-or-miss. For instance, the statue's wristwatch is painted all black, as are the shoulder straps, while the 6" action figure has a silver application to the watch face, along with raised detailing on the straps (that are painted, as well). The boot holster for Lara's knife is white on the action figure, while it's black, with a really strange clear face, allowing the knife itself to be viewed. It almost looks like they forgot to paint it. The boots are also more cleanly done on the 6" version than on the statue.

The wetsuit itself retains those weird rib lines running over the torso and legs. Maybe the actual prop had those lines, but they certainly aren't as pronounced as SOTA made them on the statue or action figure (I have a comparison picture with the movie poster that this statue's pose is based on at the end - I can't see those lines on the suit).

The splashing water effect of the base is cute, if not a bit amateurish. I like the attempt, and it's not terrible, just not very "water-like". The rest of the base has come intricate detailing inscribed along the outside, and the golden "Lara Croft Tomb Raider The Cradle of Life" imprint. 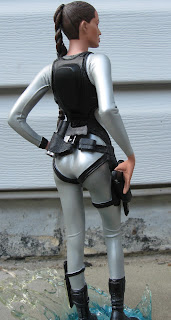 There is some slop where the black and silver paint lines meet, especially around the belt/torso area, and I've got some issues with the lack of detail in the hands (I had a similar issue with the much more expensive Gaming Heads Lara).

The "Wetsuit" statue is a nice representation of Angelina Jolie's Lara Croft from The Cradle of Life. It stays largely faithful to the movie poster, and does a decent job of capturing the likeness and look of the character and actress. It's not what I would consider a "high-end" collectible, by any means, but it is a step up from the 6" action figure. It's a nice companion piece in the display, and is well worth what I paid for it. I won't be comparing it to, or displaying it with, the Gaming Heads version I currently own, or the one I have on pre-order, but with her other SOTA sisters, this Lara is just fine. 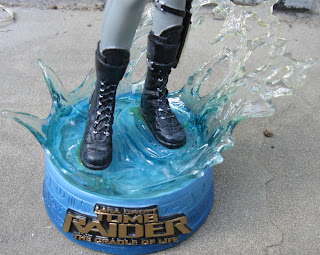 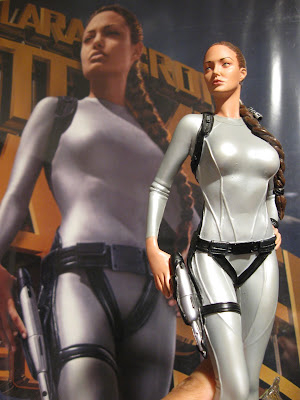 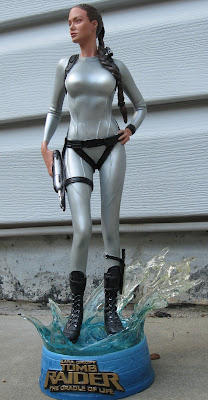 Posted by toyjedi at 9:56 AM No comments: 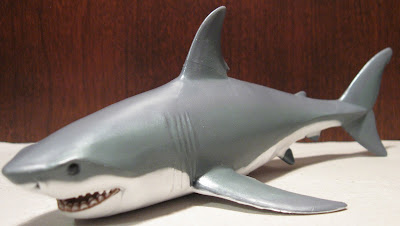 "Jaws" seemed to be on tv just about every other night this summer, in celebration of its anniversary. "Jaws" was the first "grown-up" movie I ever loved - I remember watching it over and over - and it got me obsessed with sharks in general, and Great Whites especially. I picked up Funko's awesome shark while the summer blitz was on, and it made me want a realistic replica, as well.

I'd been eyeing the Schleich Great White, but decided to go with Papo, since I've generally been quite happy with the quality of their work.

The Papo Great White is surprisingly large (relative to the Schleich version, and what I was expecting), measuring nearly 7 & 1/4" long, despite a slight curve to the tail. 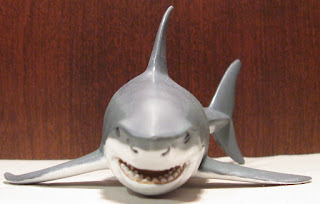 I really like the sculpt. They've given the eyes very sharp and prominent ridge lines from the snout on back, and the proportions of the entire animal are really great. My only nit here is that the lower jaw is a separate piece, glued in place, and the attachment line is very noticeable. The mouth is otherwise excellent, with two rows of teeth clearly visible on the lower jaw. All of the teeth are individually sculpted and painted. In fact, the entire figure is painted really beautifully, with one exception: the smaller fins on the underside have a weird silver stripe. It almost seems like a masking mistake while the dark grey was being applied. It's odd, and pretty sloppy. The shark is otherwise painted perfectly.

I really like my Papo Great White Shark. It looks awesome, and was exactly what I was looking for. I'm certainly glad I chose it over the Schleich version... 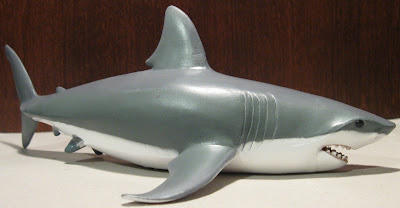 Posted by toyjedi at 4:38 PM No comments: 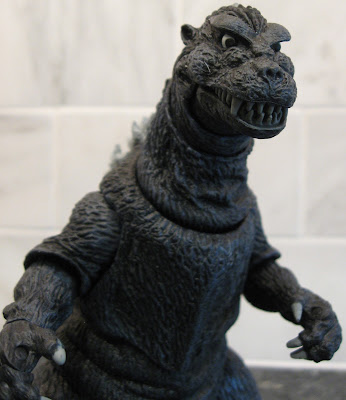 The last NECA Godzilla I bought was the 1995 "Burning Godzilla" version 5 months ago. However, this week saw the release of the fifth Godzilla in the NECA line: Godzilla 1954, from the original film. It's an excellent figure - maybe the best release in the line thus far - and more than makes up for the disappointment I felt over those last two releases (1995 and 1984/5)! 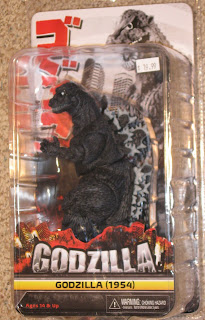 The package remains the same. The good news about that is the uniformity across the line for MIB collectors (they do look pretty cool hanging on the wall in a group). The bad part is that it's hard to discover a new release among the older pegwarmers, since nothing about them "stand out", so unless you are specifically in search of a confirmed new release, Godzilla 1954 might be easy to overlook. 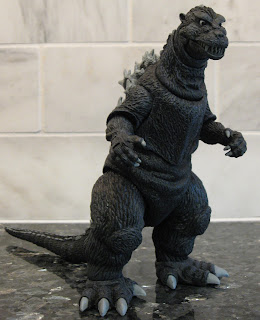 Godzilla 1954 does so many things right, where previous versions might have stumbled. The sculpt is flat out terrific. It evokes the original suit in terms of proportions, and (while the original looked pretty awkward in a couple of scenes) the NECA figure looks great from all angles. Unlike the 1984/5 figure, he just looks "right" to me. He stands very upright, rather than hunched, and I feel like the articulation serves the sculpt, rather than just being in place for the sake of it. There's a joint at the base of the neck, and another at the top, but it works better than on the 1994, because there's no "sheath" on the outside. There's a great range of motion in the two combined, allowing the figure to look nearly straight down or straight ahead. 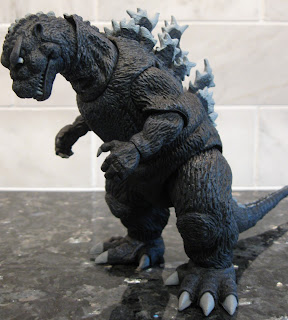 The mouth opens incredibly wide, and though the roof is absent of detail, there is a smooth tongue inside. The teeth are perfectly individually sculpted and painted, and the mouth closes exactly as it should.

There's an upper torso joint with a fantastic range of motion, allowing for swivels, twists and tilt (it's a ball). There are joints at the shoulders, elbows, wrists and fingers. The elbows are the only spot where the movement is restricted. The rotate well, but do not have much bend, despite the hinge being visible. The finger(s) joint works well, but only expect a twist at the wrists. The hips have some in/out motion, and move forward and backward a bit. There's another joint at the knee, and a twist at the ankle, but these all work together more for fine tuning, rather than providing for exciting kung-fu moves. The feet are huge, and provide plenty of stability, though NECA did see fit to include peg holes under the heels. 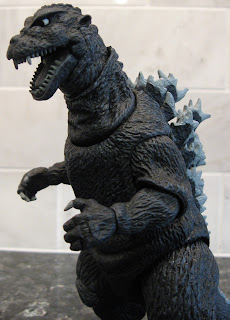 The paint is simple, but excellent. The figure is done in a grey scheme: dark grey for the body, light grey highlights along the spines, fingernails and toe nails, with a very faint lavender dry brush over everything to bring out the details. The teeth are clean, and the eyes are appropriately "googly". I did feel like the left pupil was noticeably larger than the right when I first opened the package, but I've gotten used to it and it looks right.

NECA's Godzilla 1954 "Goji" figure is a home-run on all counts. The sculpt is perfect, as is the paint and articulation scheme. It's easily my favorite NECA Godzilla so far, and looks wonderful among his other versions. Keep in mind that NECA isn't paying attention to scale with these figures, so their 1954 will not match up alongside, say, SH MonsterArt's tiny 1964 version. In fact, 1954 is their largest figure to date, period. We haven't heard any news about releases beyond this one from NECA, and Tamashii Nations seems to be winding down their Godzilla line, so I don't know what the future holds, but I certainly hope NECA will keep at it. This guy is that good... 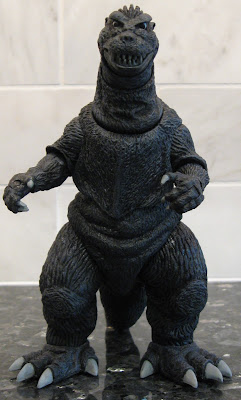