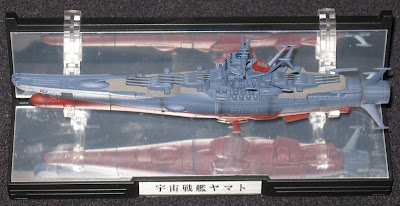 I love starships. Always have. One of my first true loves was the Space Battleship Argo, from the Americanized Star Blazers cartoon of the late 1970's. Taken from the Japanese Space Battleship Yamato, Star Blazers featured a gorgeous starship that I drew over and over again throughout my youth. I have several versions of the Argo/Yamato in my collection, including a Taito Super Mechanics version, the stupendous Popynica BPX-01, and a tiny Cosmo Fleet Collection blind-box miniature. But the new Bandai Tamashii Nations Kikan Taizen 1/2000 scale model that arrived on my doorstep this past week is my current favorite! Based on Space Battleship 2202 (or Star Blazers 2202), Bandai's new starship measures just about 6" long, but comes complete with an astounding list of features! 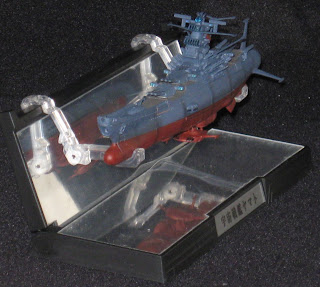 The ship comes in an attractive box COVERED in writing. Unfortunately, it's all Japanese, so I can't make heads or tails of it. There are a couple of dark shots of the model, and one really nice outline of the ship, as well. It's striking just how compact the box is when you first see it, and it's a pretty good indication of just how small the model is. The Kikan Taizen line purports "big model detail" in an affordable, "small model" size. So, many of the kinds of features you'd find on the big Popynica or Soul of Chogokin models are here, as well: working lights (with 2 separate, tiny switches) for the wave motion gun, wave engines, bridges and hull lights, rotating main turrets, and a slew of display stand options. No Black Tigers or Cosmo Zero at this scale, of course, but you still get plenty of fun in a small package! The lights work well, though the main Wave Motion gun glows white rather than blue or red, and there is some slight bleed at the rear (I get some faint yellow coming through the paint at a couple of places, but it really isn't too noticeable). There's also a tiny bit of gapping where the parts are joined towards the front of the ship's hull. The lights are controlled by two switches on the underside - you have to remove a panel VERY carefully underneath to reveal the switches. This whole thing is so small that Bandai has actually included TWO tools for manipulating parts: one is for digging into panels to aid in their removal, while another is for rotating the smaller gun turrets. 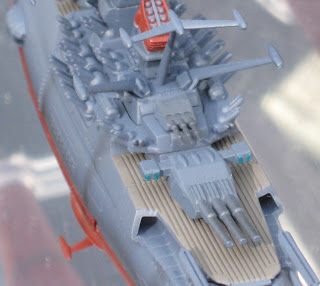 The ship itself measures 6 & 1/2" in length, and is beautifully sculpted and lovingly painted, with tons of detail and a bit of weathering. Faint airbrushing highlights hull panels on the sides, and the deck is shaded with a teak wood color. There are missiles in the stack, but (of course) they can't be retracted or extended. Everything is scaled appropriately, and this really does come across as having the same level of love and attention that the S.H. MonsterArts line had at its outset.

Everything is housed safely between a pair of clamshell trays. The antennae and various sharp protrusions of the starship are all present in their thin, delicate form. It's very challenging not to poke yourself or break anything when handling her! Yamato sports two thin panels on the hull that can be removed to install the wings in deployed mode, and one transparent part can be substituted to allow an arm to plug in as part of the display stand. The stand is, in fact, the one part I think I could do away with. It's extremely over-engineered. There are two mirrored rectangular faces with a plethora of transparent arms to attach over the top face, there's a leg for the back of the vertical face, and everything has adjustable cradles. It sounds wonderful, but the simple fact is that the ship sits too close to both faces for them to really reflect anything you'd want to see, and everything is so close to the table top upon which it would stand that it never really looks like it's flying, anyway. I'd much prefer a standard figma-style base with a simple adjustable arm that can plug into the side of the ship. In fact, I will probably try to substitute a different stand to do just this. Don't get me wrong- I really admire Bandai for trying to do something amazing here with this display stand. I just think that there's something to be said for Occam's Razor so far as this particular design goes. 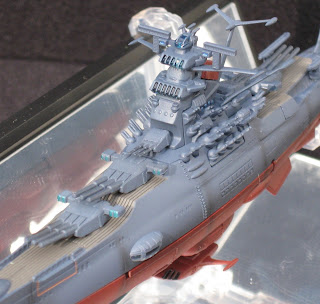 Overall, I love, love, love my new Kikan Taizen Space Battleship Yamato, and frankly I CANNOT WAIT for the release of the second ship in the line: Space Battleship Andromeda! I've seen some images of a standard Space Battleship as the third ship of the line, and I'd really love to see the line go deep, with versions of Yukikaze and Gamilas destroyers and Space Carriers, as well! The scale and size does make it absolutely affordable both in terms of money and shelf space, so I say, "Bring it on, Bandai!" I can't wait to see what they've got in store... 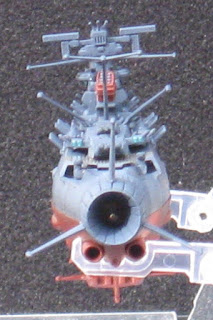 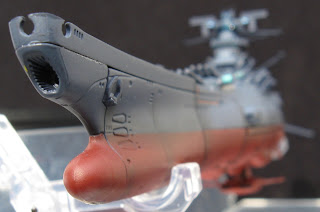